As a child Brandon L. Mull (BA ’00) often wondered what magic might be lurking in the forest surrounding his Connecticut neighborhood. He answered his own question by inventing scores of adventures and games about the woods, spinning tales that became more elaborate as he grew up.

“I’ve always had the wildest imagination in the room,” explains Mull, now the New York Times bestselling author of Fablehaven, a series of fantasy books for readers 10 and up. “I must have brought it with me at birth. I can slide into hermit mode and live comfortably in my head. I make up stories endlessly.”

When he enrolled at BYU, however, Mull majored in public relations, not creative writing. “I was scared I could not make a living as a writer,” he says. But he minored in English and secretly considered it his major. He also wrote for the Daily Universe and served four years as the head writer for Divine Comedy, a student humor troupe. “That was the best writing workshop I have ever had. I got honest feedback from the crowds and had a chance to hone my work. It taught me to keep the audience in mind as I wrote and helped me become character driven.”

While Mull enjoyed writing, he did not know how practical it would be when he married and had children. “I did everything to make a writing career possible throughout college and the years following,” says Mull, who has worked as a filing clerk, patio installer, movie promoter, and copywriter. “I just kept it a secret. I was afraid to tell anyone—I didn’t want to be pitied.” 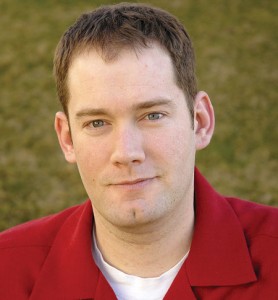 Brandon Mull’s success in fantasy fiction came as a surprise – even to himself.

There is little to pity these days. Mull’s world of mythical creatures and magical plots have taken him to the New York Times bestseller list four times. The author seems to be surrounded by his own magical fairy dust. He is writing the fifth book in the Fablehaven series and has signed a contract for three hardcover books with Simon and Schuster. Avi Arad, producer of the Spider-Man and X-Men movies, has acquired the rights to makeFablehaven into a movie.

In Fablehaven Mull chronicles the adventures of Kendra and Seth, everyday siblings who discover their grandfather is the caretaker of a centuries-old refuge for ogres, naiads, fairies, witches, trolls, and other fantastical characters. The stronghold’s existence is under constant threat of extinction by forces eager to destroy Fablehaven. Throughout, Mull offers his own spin on legends. For example, the satyrs are frat-type boys, the fairies vain, and the trolls greedy.

“That I can be doing this is amazing,” Mull says. “It didn’t look that promising in the beginning.” After graduating from BYU, he sent off his first manuscript to East Coast publishers and received the standard rejections. He eventually got the attention of a senior executive at Excel Entertainment, where he worked, who put him in touch with Shadow Mountain, a division of Deseret Book. The publisher passed on Mull’s first effort but liked his writing enough to give him another try. So he wrote a draft of Fablehaven, one of several stories he had in mind. It was accepted, and, as he says, “it took offâ€‰.â€‰.â€‰.â€‰immediately and has been steadily climbing.”

Shadow Mountain put Mull on school tours nationwide, and Mull inspires children five months of the year to invent their own worlds through reading and writing. “This grassroots marketing has really worked. I’m especially hot in the Jell-O belt (Utah, Idaho, and Arizona),” he says.

Since the first Fablehaven book release in 2006, Mull’s books have found national and international audiences. This fills his modest “top career goal of paying the bills as a writer.” But that doesn’t mean Mull is satisfied: “I believe my best stories are yet to come.”