When the Harris Fine Arts Center opened its doors 50 years ago, it provided a home where the arts could thrive, with concert halls, theaters, rehearsal rooms, classrooms, and art galleries.

And at Homecoming 2014’s BYU Spectacular, Oct. 16 and 17 in the Marriott Center, eight BYU performing groups are helping the College of Fine Arts and Communications commemorate the HFAC’s golden anniversary. 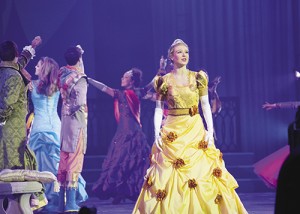 BYU Spectacular will help commemorate the HFAC’s 50th anniversary and explore the purposes and value of the arts.

“It’s quite remarkable to reflect on the artistic talent that has come to BYU, matured at BYU, and then dispersed to the four corners of the earth,” says John C. Lewis (BA ’77, MBA ’79), associate advancement vice president and chair of the Homecoming executive committee. “Having a gathering place at BYU for the arts to flourish was a crucial piece of that process.”

As part of the event, producer Michael G. Handley (BS ’83) and artistic director Janielle Hildebrandt Christensen (BA ’67) are exploring the purposes and value of art in LDS thinking.

“We jumped at President Spencer W. Kimball’s vision of the arts where he specifically charged us with developing our talents and using them for a God-given purpose,” Handley adds. “We will hear our late prophet’s voice giving us the charge, and the audience will see that art serves great purposes, because it is not only designed for the enjoyment of man but is also an instrument of God.”

To project their vision in a way that is both entertaining and thought provoking, Handley and Christensen invited renowned artist and BYU alumnus James C. Christensen (BA ’67) to infuse this year’s Spectacular with his imagination and artistic vision. Christensen’s painting Trying to Fly also provided inspiration for Homecoming 2014’s theme, Take Flight. “He has transcended all the art forms, because he paints dancers, musicians, and actors, and through the gift of his art, he speaks to us,” Janielle Christensen says. 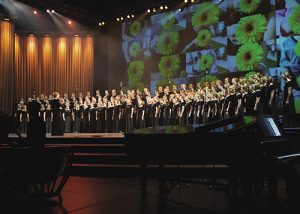 “We selected performers who have represented the university to the world as instruments bringing joy and light,” Handley says.

Also included in the evening will be a musical number from Frank Wildhorn’s The Count of Monte Cristo, which BYU will stage for the musical’s U.S. premier in January, and an original finale, Take Flight, by Randall W. Boothe (MM ’79), associate dean of the College of Fine Arts and Communications.

Tickets for Spectacular are available at byutickets.com.

For a schedule of events and other information about Homecoming 2014, see homecoming.byu.edu.