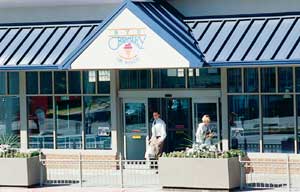 Located in the former Kent’s Market on 900 East, BYU’s new Creamery on Ninth offers low-priced groceries and a ’50s-style diner to on- and off-campus customers.

Sidewalk flowers and a ’50s-style diner are part of the charm of a new BYU Creamery. Located on the corner of 1209 North and 900 East, the Creamery on Ninth, as it is officially called, opened its doors on Aug. 24.

The building was formerly Kent’s Market (and before that, Carson’s), which closed in March 1999. As a result, the students in Heritage Halls dorms, who do not have a cafeteria, lacked access to a grocery store within walking distance. The BYU administration immediately set out to rectify the situation. BYU acquired the property in April 1999, and remodeling for the new store began.

The new Creamery’s atmosphere is summed up in its simple mission statement: “Serve good food, be nice.” And the steady flow of shoppers at the Creamery on Ninth is a testament to its popularity with on- and off-campus customers.

The Creamery’s attractions include the 9th Street Grill (a diner that seats 80), an ice cream counter, a bakery, a fresh produce section, and an assortment of other groceries, household items, and personal goods. In addition to its variety, the Creamery is able to offer low, competitive prices because it is affiliated with a major grocery distributor.

“We identified through our focus groups that students wanted convenient and inexpensive food,” said Paul R. Johnson, Creamery on Ninth manager, who formerly served as assistant director of cash operations at the Wilkinson Student Center.

And students aren’t benefiting just from convenient groceries and competitive pricing: when the new creamery opened, it created about 50 part-time student jobs. Since the new Creamery has only two full-time employees, six students are gaining experience as part-time managers.

This photograph shows the beauty of science.