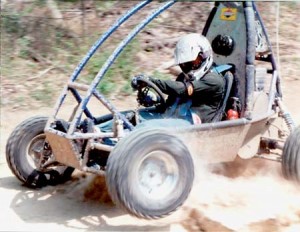 LAST April, 87 teams from universities as far away as Lebanon, Mexico, and Hawaii rolled into Logan, Utah, to enter their Baja vehicles—one-person all-terrain vehicles—into the Mini Baja West Competition, “the most prestigious manufacturing and mechanical-engineering student competition in the nation,” according to Robert H. Todd, professor of mechanical engineering. Many of these teams came hoping to oust the university that has set the standard for the last five years—the university that over that time period has twice as many top-five finishes as its closest rival. That dominant university: BYU.“BYU first competed in the competition in 1998 and within three years . . . established themselves as the school to beat,” wrote the Society of Automotive Engineers.The competition, designed to present real-world engineering problems, requires students to engineer and manufacture their own Baja vehicles to compete in a series of events and races. In BYU‘s first competition it drove to a second-place finish, an unparalleled result for a rookie team. Since then, six different BYU cars have finished in the top five, with one winning outright in 2000.Todd, who coaches one of BYU‘s teams, attributes the consistent success to the work ethic of his teams. “They’re willing to do careful analysis and good engineering and then back that up with good, practical, hands-on skills.”In this year’s competition, BYU‘s two entries—the Capstone and Junior teams—kept up the reputation, finishing third and fifth, respectively, the best combined finish for any university.But success does have its price. “On average we spent about 15 to 20 hours a week on these cars,” says Alison G. Castleton, ’03, the Junior team captain.Unlike the Capstone team, which was funded by the department, the Junior team had to find its own funding. After writing a proposal to the Women’s Engineering Council, the Junior team was awarded the women’s leadership scholarship, which is presented to only one team per year. “The event is really about designing the car, competing, and representing the university,” Castleton says, “but before the scholarship, finances were what we were worrying about.”The 2002 competition consisted of seven events. After cars were judged on safety, design, and sales presentation, they competed on hill-climb, acceleration, maneuverability, and endurance courses. Muddy conditions made driving especially challenging—so challenging, in fact, Capstone was one of only two teams to finish the hill climb.Capstone also won the four-hour endurance race, the most important event, by completing more laps than any other team, despite having to haul fuel onto the racetrack when the car unexpectedly ran out of gas.In recognition of its consistent success, BYU will host the 2003 competition next May. Event coordinators expect more than 100 teams from around the world to meet in Provo for the events, which will be open to the public. And with home-turf advantage, BYU‘s teams feel confident that they can continue their winning ways.

There is light and love ahead when we muster courage to act in faith.