BYU researchers discover how to get twice the umph out of wireless antennas. 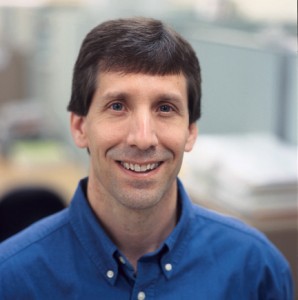 Exploiting the nature of radio waves, Michael Jensen and a team of BYU researchers showed how to make wireless antennas twice as powerful and opened an array of possibilities for wireless communications. Photo by Bradley Slade.

Fewer dropped calls. Longer battery life. Clearer communication. And potentially at no additional cost. The staticky cries of all who use cell phones and other wireless devices have been heard by a team of electrical engineers at BYU

Led by associate professor Michael A. Jensen, ’90, the group has discovered that adding a second connection to the antenna of your laptop, PDA, or mobile phone can allow it to receive two separate radio signals, effectively doubling the information it can receive without increasing the required amount of transmission power.

The research, published in the March 2004 IEEE Transactions on Wireless Communications, details how polarization—placing antenna connections at different angles—allows a device to receive and distinguish information arriving from different directions.

The technological advancement comes at the right time for cell phone service providers, who make wireless phone connections available to a constantly swelling number of consumers. “Cell phone service providers like Sprint PCS and Verizon have only a certain amount of radio bandwidth they can use for cell phone technology,” says Jensen. “To accommodate the maximum number of customers, they make trade-offs in terms of a cell phone’s vocal quality and the reliability of its signal.” Many calls drop because a cell phone tower has allotted its available bandwidth to customers currently on their phones. Companies also often decide how much bandwidth is absolutely necessary to provide vocal quality that’s intelligible, but little more, says Jensen.

“The resource is finite, and the company needs to make a profit; they balance that with customer satisfaction,” says Jensen, who was joined on the study by postdoctoral researcher Thomas Svantesson and then doctoral candidate Jon W. Wallace, ’97. “Our technology allows a company to operate more efficiently within these parameters.”

The breakthrough is made possible by exploiting the nature of radio waves. “If we’re communicating inside a building, the radio waves actually bounce off all of the objects,” Jensen explains. “So all of these copies of this radio wave are coming from different angles. If my receiver can separate those copies based on which angles they come from, I can increase the information I’m getting without increasing the frequency bandwidth I’ve used.”

This development will not require phones and other wireless devices to bulk up. In fact, it may allow future antennas to decrease in size.

“Our results indicate that you can use antennas of different polarizations to design more compact antennas,” says Svantesson, who is now pursuing similar interests at the University of California, San Diego. “This is something that most likely will be included in future wireless standards.”

Adding a second connection to a wireless antenna doubles the information it can receive without increasing the required amount of transmission power.

More important, the development makes more options available to cell phone service providers. “Doubling the amount of data cell phone service providers can send to a customer’s phone would allow them to do a few things,” says Jensen. “For example, they could improve the vocal quality of the signal itself. Or they could reduce the transmit power, thereby increasing battery life, and still achieve the same quality and reliability. Finally, they could simply accommodate more users with the same power.”

Jensen and his team have already presented the technology at academic conferences, exposing other scientists, some from prominent cell phone companies, to their work. “This is how standards are eventually agreed upon and technologies that make sense are adopted in consumer products,” says Jensen. L-3 Communications, a producer of intelligence, surveillance, and reconnaissance products, is already funding Jensen’s further study in this area.

Jensen’s future research plans include investigating whether it will be possible to add more connections, making antennas even more efficient. “Our theory shows you can have up to six,” Jensen says. “We’ve built an antenna that can do two; it would be interesting to see how far we could push toward a theoretical boundary.”

Wallace, who is currently working as a postdoctoral researcher at BYU, says he has enjoyed applying theoretical concepts to a real-life problem. “Our paper reveals the ‘magic’ behind using multiple polarizations, which hasn’t really been explained well in terms of electromagnetic theory,” he says. “The practical experience gained on the project was invaluable, and I feel that gaining a mixture of theoretical and practical knowledge at BYU has helped me prepare to be a real-world engineer.”

The joys of working with students and making scientific discoveries drive Jensen to continue his research. “It’s exciting to discover things that no one knew before,” he says. “Hopefully, you can improve the world.”

Bottom of the Ninth

Visual arts professor Ryan J. Woodward (BFA ’03) stepped up to the plate to create a new kind of app.

BYU chemist Dan Simmons has unlocked a secret of painkillers.

Student and community volunteers strung the cranes together for the exhibit Struggle, Hope, and New Life.