BYU rugby capped off a perfect season with its first national championship.

What’s it like to lose the national championship to the same team three years in a row? Disappointing? Frustrating? Embarrassing? For the players and coaches of the BYU rugby team, one emotion came to the forefront: they were motivated.

“I think the first few years it was exciting to be [in the championship] and it was an honor and everything,” says volunteer assistant coach Justen D. Nadauld (BS ’96), who played rugby for BYU in the early ’90s. “But after that, getting to the championship game wasn’t interesting at all—winning it was the only thing we had interest in.”

“It was just an amazing feeling—a feeling of satisfaction that all the hard work we put in this year paid off,” says Steven H. St. Pierre (’10), flanker and team captain. 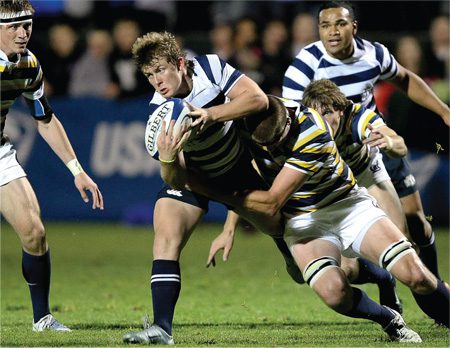 BYU rugby has suffered only 23 losses in the past 17 years, yet the relative lack of media coverage of the sport in the United States—along with the fact that rugby, like lacrosse and racquetball, is an extramural sport—has left many BYU fans in the dark concerning a team that has been around for more than four decades.

Nadauld says winning the championship felt like a culmination of 40 years of effort.

“Alumni from years gone by were there, and there were people running around crying and carrying on—it was emotional,” says Nadauld. “It was the most exciting sporting event I’ve ever attended.”

Despite its consistently good record, BYU opted for years not to compete in playoffs because the championship was always scheduled on Sunday. The championship, however, was changed to Saturday in 2004, and BYU has been a strong competitor in the playoffs ever since. The Cougars made it into the final eight in 2004 and the final four in 2005, then notched three straight runner-up finishes from 2006 to 2008. After winning the championship this year, BYU faces a new challenge.

“Now that we’ve won we’ve got to try and stay there,” says BYU rugby coach David N. Smyth (BS ’88), who played for BYU from 1983 to 1986. “Every year we’ve got to be thinking that unless we’ve won it all we haven’t been totally successful. That’s going to be a huge task, but I don’t think it’s an impossible one. We don’t want to be a one-hit wonder.”

Where are those #1 advertising students now?

These cougars have made big gains and have come out with more wins than ever.

Taysom S. Hill (’16) has jumped over, around, and through defenses and into the Heisman discussion.