When Aaron Hardy got serious about wellness, he lost a lot of weight and found a career. 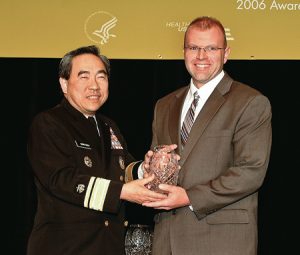 When he began his collegiate studies, Aaron M. Hardy (BA ’97) thought he might become a physician or a dentist, but first he needed to deal with a weightier matter. Hardy had been obese as a child and returned home from his mission weighing 310 pounds. He decided it was time to make significant lifestyle changes. Over the next two years, through a combination of good nutrition and exercise, he lost 100 pounds.

“I spent so much time working out at BYU and hanging around the College of Health and Human Performance that I saw another career possibility,” he says. He earned a bachelor’s degree in health promotion and then coordinated BYU’s Wellness Program while earning a graduate degree in the same field. As he created a work environment that promotes healthy lifestyles, decreases the risk of disease, and enhances quality of life, he realized he had found his passion.

“Helping adults make changes that will affect the rest of their lives is gratifying,” he says. “The message of wellness is urgent, not only because of the nation’s obesity epidemic but also because even modest lifestyle changes toward better health can make significant differences.”

His is a straightforward approach focused on physical activity, proper nutrition, a routine physical examination, and smart daily health decisions. “Wellness must be simple and doable,” he emphasizes. “The typical adult is so busy that a wellness approach must be basic, without complications. Otherwise, most of them will not do it.”

Hardy has seen firsthand what a few lifestyle changes can do for adults: “They can delay the onset of chronic diseases by many years, and the time spent in pain and disability can be compressed considerably.”

For eight years Hardy worked as the wellness director for the Washoe School District in Reno, Nev. In February 2007 he began working full-time for Integrated Health and Wellness, a company he founded in 2003.

His Washoe curriculum featured six wellness challenges each year. In addition to promoting nutrition and exercise, the challenges included learning the benefits of laughter, getting enough sleep, and maintaining weight during holidays. One challenge called for daily flossing. Those who developed the habit received a year’s supply of dental floss and a gum used by the military to maintain dental health.

“We’re in the business of reminding people their health is important,” Hardy says. His efforts have received national attention in magazines, conferences, and journals. In 2006 the Washoe School District received the Innovation in Prevention Award from the office of the U.S. secretary of health and human services and an honorable mention for the C. Everett Koop National Health Award; in 2007 one of his clients received the Best Employers for Healthy Lifestyles Gold Award.

Because Hardy believes the health and happiness of employees has a direct impact on a company’s financial health, he considers financial incentives an important part of any successful wellness program. “We encourage and reward responsible, healthy behavior,” he says. “Those who have a routine physical in the Washoe District and participate in the health initiatives receive a $480 discount each year from their insurance premiums. It’s a lucrative incentive, and 90 to 95 percent of employees participate.”

As important as wellness programs can be, Hardy cautions they should not mirror the medical world’s approach to identifying, diagnosing, and treating patients. “Our business is about encouraging healthy behavior,” he says.

Hardy says wellness has changed his life. “For one thing, I probably would not have attracted my beautiful red-headed wife. I wouldn’t have children who have grown up putting blueberries on their cereal—and liking it. Every pound I lost has [resulted in] a huge return in my life. I set myself up for success, and I want to do the same for others.”

Wishing their parents farewell, these kids dive into the wonders of the world thanks to the Bean Museum.

How alumni use their BYU education to serve their communities, neighbors, and families.