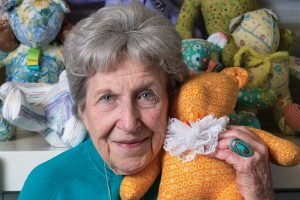 For more than 20 years, Ruth Brasher has been stitching teddy bears for abused kids. She leads a volunteer army that has made an estimated 20,000 bears. Photo by Bradley Slade.

A small girl tentatively looks through a variety of meticulously sewn handmade bears lining a shelf at the Utah County Children’s Justice Center. Some are adorned with multiple shades of rickrack trim. Others are denim with bolo ties fashioned from leather shoelaces. A few are black with brightly colored vests. The girl eventually chooses a soft green teddy bear with rows of ivory lace and tightly hugs it to her chest.

The bear is hers to keep, a gift from the Provo Pleasant View 9th Ward Relief Society. For more than two decades, Ruth E. Brasher (BS ’51) has spearheaded the ward’s bear-sewing undertaking as a way to show children who have been abused that somebody cares for them.

In 1992, the Relief Society sesquicentennial, “we were asked to complete a project for the celebration,” says Brasher, former chair of BYU’s Home Economics Department and former associate dean of the College of Family, Home, and Social Sciences. “I wasn’t interested in just doing one lovely thing. I wanted us to do something that had to last long enough that it would require some level of sacrifice.”

The original idea was to create 300 bears for the Emergency Medical Unit of the Provo Fire Department. When it became apparent that the unit would not be transporting that many children, they redirected their attention to the Utah County Children’s Justice Center, a safe, homelike facility that helps children and families in a state of crisis.

Brasher guaranteed the center 50 bears a month. She still does, and some months she and her team have produced as many as 90 bears. Each bear takes between four and six hours to complete, and since the volunteers started, they’ve made an estimated 20,000.

“It’s wonderful to think that so many people have contributed that many bears, but then it’s incredibly sad to think that many children have qualified to receive them,” she says.

Brasher hopes the bears she and her team make send the message to children that someone is interested in them, that they matter, that they are safe, and that healing has begun. Brasher recounts the story one former bear recipient shared with her: “When she finally summoned the courage to tell her mother that her father had been abusing her, her mother immediately took her to the center for help, and she got a teddy bear. She told us that little bear became her only friend for years.”

“I wasn’t interested in just doing one lovely thing. I wanted us to do something that had to last long enough that it would require some level of sacrifice.”

Carol A. Ellsworth (EdD ’80), who has been helping Brasher from the project’s inception, says hearing children’s stories “just tugged at my heartstrings.” Ellsworth, also a former chair of BYU’s Home Economics Department, makes an average of 10 bears a month.

“I have a spare bedroom I turned into a sewing room,” she says. “I . . . go there and just disappear in a world of teddy bears.”

Other volunteers also help from home, and an average of 15 to 20 Pleasant View women still meet once a month in their Relief Society room. Occasionally additional individuals and groups help, and anyone who wants to help cut, stuff, and sew the bears is always welcome.

“A woman once approached me and asked when we were going to end this project,” Brasher says. “I told her we would be finished when no child remained who needed one.”

No one has ever mentioned quitting again.

Entering to Learn and Going Forth to Serve

The phrase, "Enter to Learn, Go Forth to Serve," is an apt description of the Lord's invitation for all of us.

These eager BYU students didn’t wait for graduation to “go forth.”