Utah residents have spent a fair share of time in the bankruptcy spotlight, turning in some of the highest filing rates in the nation. Consequently, numerous theories have cropped up to explain Utah’s bankruptcy-filing rates, many pointing to the local culture’s large families, big homes, and charitable contributions.

But when BYU economists Lars J. Lefgren (BA ’96) and Frank L. McIntyre (BA ’98) set out to find what was behind the highly disparate bankruptcy rates across America, they looked in a different direction.

It turns out they just live under different laws. 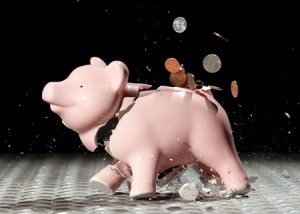 A BYU study shows why people in some states break the bank more than others.

In a study published in the Journal of Law and Economics, Lefgren and McIntyre pinpoint state policy, not people, as the largest contributing factor to a state’s bankruptcy rate.

After studying bankruptcy rates by zip code from 1999 to 2001, Lefgren and McIntyre concluded that the greatest factor affecting a state’s bankruptcy rate is that state’s wage garnishment law. When a debtor slides into delinquency, the creditor can take legal action to garnish money from the debtor’s wages. “When someone gets slapped with a garnishment,” Lefgren says, “he or she may be more likely to declare bankruptcy to get out from under it. The result is a larger number of bankruptcies in states where it’s easier to garnish wages.”

The study also shows that bankruptcy rates rise in states where more filings occur under Chapter 13 of the bankruptcy code rather than Chapter 7. A Chapter 7 bankruptcy liquidates the debtor’s assets and generally clears all debt. Under Chapter 13 filers establish a payment plan to decrease their debt, but they often fail to maintain payments, and the bankruptcy is dismissed. In such cases debtors typically file for bankruptcy again, causing the same debt to incur multiple bankruptcies.

For states like Utah, where many residents file under Chapter 13 and local laws make it relatively easy for creditors to garnish wages, the BYU study shows that bankruptcy rates reveal more about Utah laws than they do its people.

The Quiet Persistence of Stone

Even in the pronouncement of their names one can feel the weight of their history: Suqsayhuamán. Machu Picchu. Moai.

Tales and Textures of Antiquity

In a new exhibition at BYU's Museum of Art, visitors catch a glimpse of ancient Egypt, Greece, and Rome.

Not Your Usual Sight

Determined and focused, a blind student shows others the way.