Ad-ing to the Missionary Effort 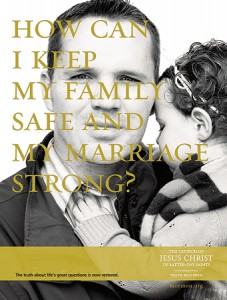 Readers of Sports Illustrated may have been surprised last year to see—alongside ads for clear-gel deodorant and ESPN talk shows—an advertisement for The Church of Jesus Christ of Latter-day Saints. It was part of the Church’s new “Truth Restored” media campaign piloted in Nevada, New York, and Kansas. Kevin Kelly, a BYU associate professor of advertising who has done work for such corporations as American Express and Kimberly-Clark, served as chair of the campaign development group formed by the Church’s Missionary Executive Council and the Missionary Department.“Simple and genuine was the idea,” Kelly says of the minimalist advertisements that ran from May to December of 2007. Rather than use actors and models, the TV commercials and regional magazine ads featured the unscripted remarks of converts about how the restored gospel answers important life questions. The campaign also used radio spots, billboards, and pass-along cards to direct audiences to mormon.org.At the Web site, Internet users can watch video testimonies, browse information about Church beliefs, and even chat live with missionaries at the Provo Missionary Training Center. According to Kelly, the campaign replaced the usual 1-800 number with the Web address to give individuals a pressure-free way to explore the Church at their own pace.The strategy also makes sharing beliefs easier for members of the Church. “Members have always been a little challenged in trying to get the courage or the right approach to share the gospel,” says Scott H. Swofford (BA ’79), the Missionary Department’s media director. “When media can do the work of creating the stimulus and [the members] get to respond to the questions, almost all Latter-day Saints welcome that opportunity.”While the Missionary Department is still reviewing the campaign’s results, there have been at least a few converts already: “We advertisers—we all got converted,” says Kelly. “It was like we were missionaries again.”

Through the good, the bad, and the funny, this missionary kept her mission journal as a 628-page comic strip.