Through the Gordon B. Hinckley Alumni and Visitors Center, BYU will extend its hospitality to both graduates and guests, providing an inviting front door to campus. 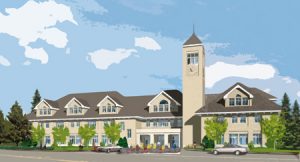 On President Gordon B. Hinckley’s 96th birthday, BYU will break ground for a building that honors a man who has broken ground worldwide for The Church of Jesus Christ of Latter-day Saints.

The June 23 event will mark the beginning of construction on the Gordon B. Hinckley Alumni and Visitors Center, a facility to greet university visitors, provide a gathering place for the extended BYU family, and pay tribute to the prophet, who has presided over one of the most productive and expansive periods in Church history.

Among those who have led the effort to build and fund the Hinckley Building is Jack R. Wheatley, a West Point graduate and former mayor of Palo Alto, Calif., who began his extensive association with BYU in the 1970s after being inspired by his children’s experiences at the university (see “A University to Match the Mountains”).

Wheatley’s leadership and vision have been a steady influence as the building’s form and function have taken shape. “The new building needs to communicate that visitors have stepped onto a religious campus,” he says. “It is sacred space. As a starting point for our guests and other visitors, the building must help visitors feel the university’s spirit and undeniable connection with our faith.”

“It is not uncommon for people who visit the campus to sense a spirit that distinguishes it from other places, which is probably easier to feel than to describe,” says John C. Lewis (BA ’77), associate advancement vice president for alumni and external relations. “Our alumni call it the Spirit of the Y, and we hope this building will be a place to bask in that spirit.”

In addition to welcoming visitors and alumni, Wheatley wants the building to engage students with the Alumni Association from the moment they enter campus. “Our students will be alumni far longer than they will be students,” he explains. “We seek lifelong associations so our students don’t simply march out of school and never return. We want them to rub shoulders with the BYU Alumni Association through an array of events, service opportunities, and exchanges with faculty.”

To that end, Wheatley hopes the number of alumni who develop a direct connection with the university will double, triple, even quadruple. The new building will be an added resource for creating those connections. 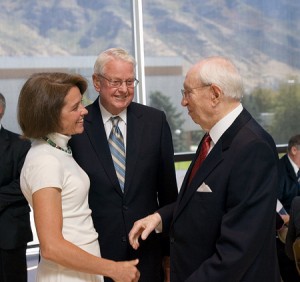 President Gordon B. Hinckley greets Jack R. Wheatley and his daughter Victoria Wheatley Schmidt (BS ’78) in the newly dedicated Joseph F. Smith Building. Wheatley, a cochair of the BYU President’s Leadership Council, is gratified that the next facility to be built on campus will be named after President Hinckley. Photo by Mark A. Philbrick.

Wheatley is especially gratified that the building’s name encourages alumni and friends to show devotion for a dearly loved man whose life of service and abundant goodwill provides a model for welcoming the world to the university.

“We have been deeply blessed having President Gordon B. Hinckley lead the Church,” he says. “This is our time to honor him. Now is the time to pitch in and to put our names alongside that of our prophet.”

The following describes the purposes of the Gordon B. Hinckley Alumni and Visitors Center.

For information about or to donate to the Gordon B. Hinckley Alumni and Visitors Center, visit gbhb.byu.edu.

FEEDBACK: Send comments on this article to magazine@byu.edu.

A Front Gate to the University 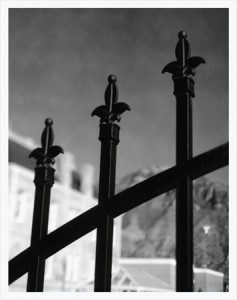 Rising prominently on the western edge of the bluff that holds central campus, the new Gordon B. Hinckley Alumni and Visitors Center will serve as an eye-catching greeting—a front gate—to guests and alumni entering the university on North and West Campus Drives. BYU administrators hope visitors, from prospective students and graduates to scholars and government dignitaries, will find the building’s purpose and architecture welcoming.

“It will be a gateway to the university,” says BYU president Cecil O. Samuelson. “It will be a hallmark building that will identify clearly what BYU means to the kingdom and tell the history and story of BYU. It will be a magnet for our alumni, our students, their families, and our friends and visitors who will come to our beautiful campus.”

Thousands of visitors and guests stream onto campus each year, with a significant jump in numbers since the 2002 Olympics gave BYU wide exposure. “BYU is in the limelight more than ever before,” says Carri P. Jenkins (BA ’83), assistant to the president for university communications. “More and more, we’re seeing scholars, government leaders, and international dignitaries putting BYU on their travel itineraries.”

Currently VIP guests are hosted at the former president’s residence, which has charm but limited facilities. Its location, tucked away on the southwest corner of campus, is less than ideal. The new Hinckley Building, just north of the Tanner Building, will greet visitors at the main entry to campus, and its facilities will accommodate both intimate and large gatherings. 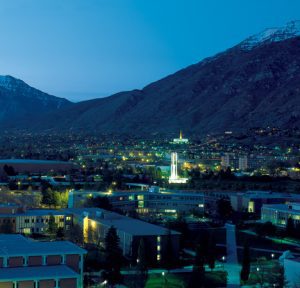 Alumni and visitors will attend functions in three meeting rooms with movable walls that will open up to create one large room accommodating about 500 people. With a dramatic wall of windows looking out to the western horizon, these spaces will serve events ranging from homecoming reunions to ambassador receptions.

The dual purposes of the building—to serve both alumni and visitors—will merge two complementary functions that previously were housed separately, says J. Craig McIlroy (BA ’78), the new president of the BYU Alumni Association. “It will enable us to not only welcome back all of our dear alumni friends, but also receive our guests who come from around the world to see the campus.”

A Place to Feel the BYU Experience 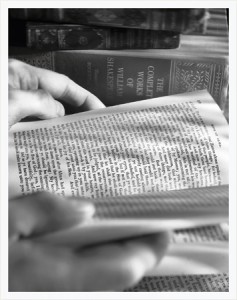 When completed, the Gordon B. Hinckley Alumni and Visitors Center will include an area on the main floor for a small theater and exhibits to educate visitors on what BYU stands for and why it was established. Some displays will acquaint guests with the school’s sponsor, The Church of Jesus Christ of Latter-day Saints, and with BYU’s mission to deliver an education that integrates sacred and secular learning. Other exhibits will highlight the stories of BYU students, faculty, and alumni who have contributed to the world in significant ways.

“We see it being an honest-to-goodness visitors center, much like those we have for visitors who come to Temple Square or other temples. It will be a place where people can learn about the Church and its relationship with BYU and why BYU is different from all other universities,” says Bruce L. Olsen (BS ’63), director of Church public affairs and president-elect of the BYU Alumni Association. 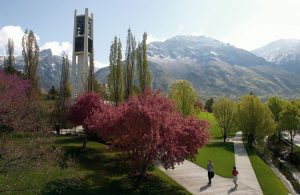 Photo by Mark A. Philbrick

Currently, guests can read a typed narrative describing BYU and its origins, but experiencing the account in a multimedia format will “communicate more powerfully the spirit of BYU,” says Olsen.

Working with BYU guests over several decades, BYU Public Affairs and Guest Relations director Ronald J. Clark (BA ’72) has watched visitors absorb BYU’s story and has seen misconceptions laid to rest and new ambassadors for BYU created. With the new building and its exhibits, Clark believes people will quickly grasp what BYU is all about: “When people enter this building, they’ll feel what the wife of the ambassador from Egypt felt when she visited BYU. She said, ‘Your people live the principles of Islam.’ That was one of the highest compliments we could be paid—to be likened unto their faith, which they hold dear and sacred. After just a short time on campus, they were very much aware that our students were living by a higher law. The building will be more than brick and mortar. People will be touched here.”

A Campus Home for Alumni 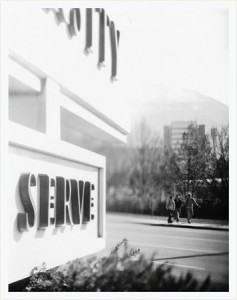 Graduates of BYU typically open the door of the Alumni House just twice in their entire lives—when they pick up and return their caps and gowns. Alumni leaders want this to change and are hoping alumni and students will integrate the Gordon B. Hinckley Alumni and Visitors Center thoroughly into their BYU experience.

Prospective students will find an introduction to BYU in the exhibition area; new students will be oriented in the large meeting room; current students will host family and friends in the visitors center; alumni will return for reunions, banquets, and other university events.

“When young men and women enter BYU, they begin forming a connection to the university that we hope will build into a lifelong relationship,” says Lewis. “As these students graduate and ‘go forth to serve,’ they become both contributors to the university and alumni-ambassadors to the world. This building will be a place where alumni can come home.” 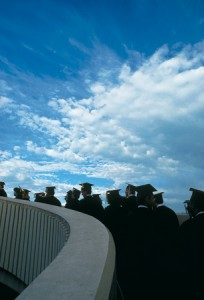 The design includes a family-room space on the main floor—with a fireplace in one area and a two-story window looking west in another—where alumni can relax and reminisce. A business center and other rooms will accommodate visiting alumni who need to conduct meetings, send faxes, or plug in a laptop computer to check e-mail.

The upper floor of the building will include office space for growing alumni programs. Since the current building was erected 40 years ago, the number of alumni has grown from about 50,000 to some 350,000, and services are growing as well. The Alumni Association’s offerings now include career services, reunions, travel programs, parents weekend, and more than 170 regional chapters around the world. One of the more recent innovations is affinity groups, which bring together alumni according to interest rather than class year. The new building will consolidate alumni programs and services physically, serving alumni with greater efficiency.

“The current 40-year-old building has been very good to us, but we’ve outgrown it,” says J. Michael Busenbark (BA ’72), executive director of the Alumni Association. “With the new building, we’ll be able to launch our programs locally and worldwide much better and accommodate our alumni in a much better fashion than we can now.”

A Tribute to President Gordon B. Hinckley 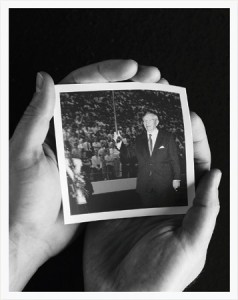 As an ambassador of The Church of Jesus Christ of Latter-day Saints for nearly 70 years, Gordon B. Hinckley has embodied openness, understanding, and love for the Savior. His gift for reaching out to the world was first noticed in the mid-1930s, when he was called by then–Church president Heber J. Grant to organize the Church’s public affairs program. He directed that program for 20 years.

During his decade as the 15th President of the Church, President Hinckley has traveled the world many times, engaged the media to boost awareness of the Church, and repeatedly urged Latter-day Saints to embrace people of all faiths, ethnicities, and nationalities. 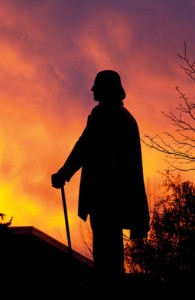 “Just as Gordon B. Hinckley has reached out to people in the four corners of the earth, the Gordon B. Hinckley Alumni and Visitors Center will receive people from all quarters,” says K. Fred Skousen (BS ’65), BYU advancement vice president. “They will be welcomed here, introduced or reconnected to BYU here, taught something of the restored gospel of Jesus Christ and the eternal importance of education here, and befriended here.”

Skousen has been impressed with how beloved President Hinckley is, as evidenced by people’s eagerness to contribute to the new building. As of early April, more than 30,000 had already donated.

“President Hinckley is so self-effacing that he would never seek this kind of honor. I view it personally as a chance of a lifetime for us to leave a legacy on this campus in his honor,” says Skousen.

Carr C. Krueger (BS ’85), the 2004–06 president of the Alumni Association, says, “We are so fortunate to be part of the leadership group that will see the reality of the hopes and dreams of so many past alumni leaders. What makes it even sweeter is that this facility will stand in honor of our beloved prophet, emphasizing his legacy of outreach and his invitation for the entire world to hear the good news of the gospel.”