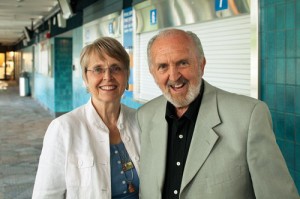 Faithful attenders at Homecoming Spectacular for more than four decades, Don and Jean Marshall annually bring a group of more than 20 friends to “the best show in town.”

For more than 40 years, Donald R. Marshall (BA ’60) has arranged to be at the Marriott Center ticket office the moment tickets go on sale for Homecoming Spectacular. For him—and 11 of his favorite couples—the Spectacular is as anticipated an event as Christmas.

Even in the era of online ticket sales, the retired humanities professor insists on being in the Marriott Center to look at the charts and see exactly where his seats will be. “Last year, I am happy to say, I got 12 pairs of the best tickets I have ever had,” says Marshall, who managed BYU’s International Cinema for many years.

Part of Marshall’s pleasure in seeing the show every year is his love of the arts. His bachelor’s degree was in art with minors in music and French, and he received master’s and doctoral degrees in American literature. He has been attending arts events since he was a BYU freshman in 1953.

He also likes to see new ideas from the performing groups, and he enjoys how sophisticated they have become since the years of Fieldhouse Frolics, Spectacular’s somewhat-homespun predecessor. Marshall remembers when performers could just sign up to participate; the talent has become so advanced, he says, that everything requires an audition now. 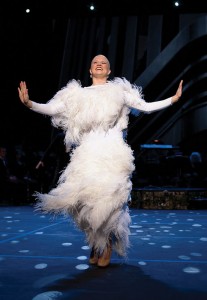 Spectacular is the highlight of a reunion he and his wife, Jean (BA ’63), host at their home every Homecoming. Donald served in the Army National Guard in the early 1960s and spent a year in Missouri awaiting word on whether he would go to Germany as part of the Berlin Wall crisis. Drawing on his musical background, he wrote music and started a chorus in Missouri while they waited. “It made a lot of difference in tour morale,” he says.

When they returned home, some of the guardsmen began gathering for a potluck dinner with their spouses. It soon became standard to meet at the Marshalls for dinner and head over to the Marriott Center for “the best show in town.”

“We started with our local friends, expanded to our Salt Lake friends, and have added two couples from Idaho who come down every year,” Marshall explains. “We wouldn’t miss it. I’m amazed at some of the things on stage. I’ve directed a lot of productions and love to put my mind in the director’s seat. Spectacular is a spectacular experience.”