A Serious Study of the Funnies 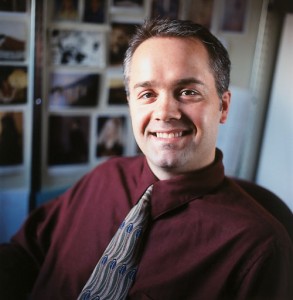 Humanities assistant professor and pop culturist Kerry Soper sees comics as more than just pictures and punch lines. He considers them an important piece of a healthy society.

Studying comics and pop culture, a BYU humanities professor examines the role of satire in society.If there were a prize for most-teased professor at BYU, Kerry D. Soper would likely win hands down. Soper studies comic strips—and the Simpsons and David Letterman and soft drink commercials and Saturday Night Live. And his colleagues don’t let him forget it.“There’s a running gag in our department meetings that any unpopular curriculum proposal is ‘like allowing the study of popular culture into our program,'” says Soper, who doesn’t mind the needling.An assistant professor of humanities, he specializes in 20th-century American culture. He may be the university’s resident pop culturist, but he also is highly versed in more traditional American art, architecture, and literature.Still, he won’t deny that his heart lies in studying comics and other aspects of pop culture. And while he has fun with his subject matter, Soper believes it should be taken seriously.He’s currently working on a book titled Seriously Funny Papers: Satire in Mainstream American Comic Strips, which will chart the history of satire in mainstream American comics throughout the 20th century. He has found that incisive satire—once a staple of American newspapers—is nearly absent from today’s comics. Struggling for readers, newspapers are bowing more and more to the pressures of advertisers who don’t want to offend potential customers. The result, Soper says, is a comics page filled with pabulum and generally devoid of challenging or intellectually stimulating discussion.“Editors want the comics page to be safe and totally controversy-free. They’re wary of anything that causes distress among core readers. So it’s almost all bland, the very opposite of what satire should be,” says Soper. “One way to judge your success as a satirist is to see whether nerves are touched—whether you can provoke people to get off the couch and write angry letters to the editor.”Soper says this sanitizing of comics extends to the opinion page as well, where a good cartoon can cut to the heart of a political matter, comment on it, and make readers laugh—all at the same time. But most newspapers have dispensed with their on-staff cartoonists, who tend to target local personalities and controversies and thus hit too close to home.“It’s safer and cheaper to get bland, generic, national political cartoons and just fire the local cartoonist who’s always causing problems,” says Soper.And what is lost when satire loses its sting? An essential ingredient of a healthy democratic culture, Soper argues.“Good satire can undercut the billions of dollars advertisers, politicians, and public relations firms pour into promoting their ideas and products as something that we should all accept uncritically. Satire acts as a watchdog against commercial society, corporate culture, and political propaganda,” says Soper.The few bright spots Soper sees on the mainstream comics page include For Better or for Worse and Boondocks.“From a distance, For Better or for Worse might seem like a bland domestic strip, but it actually explores really interesting, complex things related to current events and familial relationships. Boondocks is this edgy, satirical strip with black children saying ironic things about news programs and mainstream entertainment from a critical black perspective.”These strips suggest to Soper that satire doesn’t die easily. People have a taste for it, and it can thrive in the right environment.“There are niche audiences that will latch onto this stuff and allow it to survive because they thirst for it, but there are a lot of mechanisms working against those cartoonists. They really have to fight an uphill battle.” 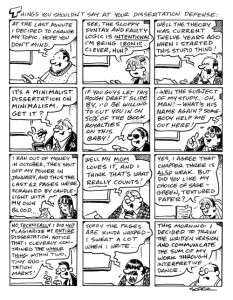 Soper knows comic strips not only from studying them as a scholar but also from creating them himself. He was a cartoonist for the student newspaper at Utah State University, the Statesman, and in 1990 won the Charles M. Schulz Award for the outstanding student cartoonist in the nation. He had aspirations of becoming the next Schulz, whose Peanuts strip ran in more than 2,000 newspapers for 50 years, but a careful study of syndication in today’s world made him think twice about that road.“I found that about two out of 5,000 cartoonists make it to the comics page, and those two might not survive longer than a couple of years,” he says. So he decided to make a more secure living as a professor but still do cartooning on the side.“I love it because I don’t have the pressure of getting a daily strip out or having to deal with a syndicate that’s going to censor or filter what you do. And I still get to do comics when I want to do them.”In 1997 he sketched a parody book for Hyperion titled Chelsea Clinton’s Freshman Notebook. The back cover of the book describes a pre-BYU Soper as “an employment-challenged American Studies professor” who “will draw for food.” The Chronicle of Higher Education regularly publishes Soper’s cartoons, which poke fun at the academic world. One cartoon, titled “Things You Shouldn’t Say in a Tenure-Track Job Interview,” features 12 sketches of desperate interviewees, including a harried woman spouting the pretentious language of an academic wannabe: “Describe myself? Oh I’m just a simple neo-conservative, radical deconstructionist, post-feminist, multicultural classicist . . . or whatever else you want me to be.”When Soper submitted his first cartoon to the Chronicle two years ago, the editor who reviewed it e-mailed him ecstatically: “We LOVE your cartoon and plan to use the whole strip on our back page for the issue that will be distributed at the meeting of the Modern Language Association. The big question is . . . can you do more? We’re hungry for this sort of bold, hip poking-fun at higher ed from the inside.”Though Soper is adept at skewering academic pomposity, he remains a dedicated scholar. Colleague George B. Handley, ’89, an associate professor of humanities, respects Soper’s serious approach to a controversial topic.“He works with a lot of very interesting material that other people would not normally consider. When he applied for the job, his candidate lecture was on the relationship of political cartoons and painters during the early 20th century in American culture. He made connections between so-called high art and popular culture. I thought it was very persuasive to the department,” says Handley.But at BYU and in the humanities field at large a genuine debate remains over how seriously popular culture ought to be studied. Soper argues that it is every bit as deserving of study as any other humanities specialty.“

People often confuse the value of products created by popular culture with the value of studying such products. If academics treat all cultural products as cultural artifacts, whether they are considered high art or low art, they will get much further in understanding society,” he says.For example, Soper says a careful study of satire trends reveals a disturbing development affecting Generation X and Generation Y. When satire got battered on the mainstream comics page, the venue shifted to magazines and late-night television shows like The Tonight Show with Jay Leno, The Late Show with David Letterman, and Saturday Night Live.“This new generation learned the discourse of postmodern satire, which is an ironic, continual undermining of authority and a mocking of the earnestness of heroism. Everything is fair game for that kind of cynical, knee-jerk irony. It’s the pose David Letterman takes on everything.”The result is that Generation Xers and Generation Yers tend to talk to each other in cynical, sarcastic terms, Soper contends. Pop culture has taught them that owning up to true emotions or ideals opens them up to mocking.“It’s not hip to be earnest. You have to say things in the right way to preempt possible mockery. Even advertisers have learned how to adopt the satiric pose. Companies like Sprite create ads that are self-satirizing. They mock other soft-drink ads and then conclude at the end, including themselves in their rhetoric, that ‘image is nothing; thirst is everything.'”To Soper the issue is not so much whether the cultural products are good satire or bad satire but that their marks are indiscriminate. Rather than taking careful aim at deserving targets, anything and everything is fair game, and consumers of such satire often end up with cynical perspectives instead of critical awareness. Soper believes that shedding light on such trends is important.“We are immersed in popular culture, and it’s essential that we become culturally literate and critical in how we receive or use it,” he says. “I see myself as educating people to be critical viewers, readers, and consumers.”