A Lighter of Lamps

A pioneering female educator at BYU, the 2006 honored founder inspired thousands of students. 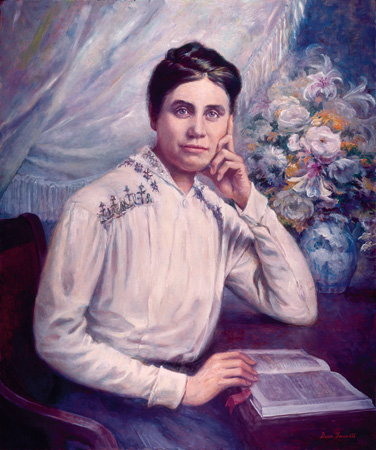 Alice Louise Reynolds will be honored at Homecoming 2006

In 1911, Alice Louise Reynolds (BPd 1895) became the first woman to deliver a BYU Founders Day address. More than nine decades later, BYU will pay tribute to this early BYU educator by naming her its 2006 founder and patterning the Homecoming theme, “Lighter of Lamps,” after the title of her biography.

Reynolds’ life was characterized by academic excellence as well as an intense devotion to BYU, her students, and the building of a substantial library.

Reynolds came to Brigham Young Academy in 1886 at age 12 to study under Karl G. Maeser. An intense lover of learning, Reynolds basked in her time with the renowned scholar. “Every hour with him was an hour of inspiration,” she said.

With education at the center of her life, she made BYA, and subsequently BYU, her home. When academy principal Benjamin Cluff Jr. wanted to establish a literature program, he thought of Reynolds and persuaded her to train at the University of Michigan. Upon her return she became the first woman to teach college-level courses at BYA, teaching all literature classes until 1903. In 1911 she became the first woman advanced to full professor at BYU.

“For more than 40 years the life of this school was her life; its problems, her problems; its triumphs, her triumphs.” –Parley Christensen

If Reynolds’ life could be condensed into a single word, however, that word might be books. As her biographer, Amy Brown Lyman, explained, “She was a great lover of books. . . . She loved to be surrounded by books, to touch and handle them, and above all, to own them, or to present them as gifts to dear friends. She got as much pleasure out of giving a book as did the recipient.”

She dedicated more than 30 years to building a large and comprehensive library and was a charter member of a faculty library committee established in 1906. She served as its chair for 19 years and headed many fund-raising drives to acquire books.

By 1929 the Heber J. Grant Library held an impressive 50,000 books, but President Franklin S. Harris challenged Reynolds to double that number. She accepted and pledged to donate 1,000 books personally. When the 100,000 mark was reached eight years later, Reynolds had contributed 998 volumes. The Alice Louise Reynolds Club (a literary society with chapters at BYU and nationwide) donated two more books to help her reach her goal. Her memory is honored today in BYU’s Harold B. Lee Library, where an Alice Louise Reynolds Room was named in 1977.

Upon her death in 1938, Church and educational leaders alike stepped forward to praise her. Parley A. Christensen, then head of the BYU English Department, said, “Her loyal devotion was nowhere better shown than in her relations with Brigham Young University. For more than 40 years the life of this school was her life; its problems, her problems; its triumphs, her triumphs.”

At Reynolds’ funeral, Apostle George Albert Smith said, “You may look over the annals of this church and check over the names of the women who have majored in blessing mankind. I think you will find no one who has contributed more unselfishly than Alice Louise Reynolds. To my mind, that was her dominant trait—unselfishness.”

Groundbreaking BYU research shows what it takes for a woman to truly be heard.