A Jersey to Remember

She was a two-time finalist for the national player of the year Wade Trophy and a star player of a four-time conference championship team. Thirty years later, Jackie Beene McBride (BS ’84) returned to the Marriott Center to see her jersey retired during halftime of the women’s basketball final home game. 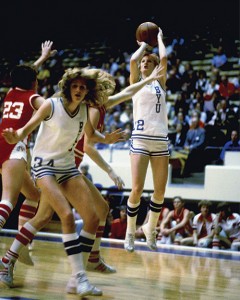 Danny Ainge’s no. 22 is now joined by another no. 22–Jackie Beene McBride’s.

“This is home for me,” Beene McBride said at the event. “So it’s nice that they’re willing to hang my laundry in the rafters.”

Her jersey won’t hang alone. She is the second female to have her digits retired, joining former teammate Tina Gunn Robison (BS ’80) right up there with greats like Danny R. Ainge (BA ’92)—who in fact shares Beene McBride’s no. 22 and played at BYU at the same time. She says the shared number inspired her: “I used to think, ‘Pretend like you’re Danny Ainge,’ and then I would just go play ball.”

And Beene McBride did just that. In her four years, from 1978 to 1982, the 6-foot guard/forward became the second BYU women’s player to score 2,000 points—at a time when three-point shots didn’t exist. With 2,191 points, she is one of only four women—and four men—to achieve the feat at BYU.

The BYU Hall of Famer’s favorite BYU basketball memory, however, had little to do with her mad skills—it was seeing three fellow teammates join the Church, including Gunn Robison. “My favorite thing about BYU and being here was the people I met and the people who changed my life,” Beene McBride says.

Gunn Robison and Beene McBride played together for two years—and notched a 138-point win, the most points ever scored in the Marriott Center.

The new Hall of Honor has everything Cougar fans need to relive their favorite BYU hoops memories.

Changes Made in Men’s Basketball

In the summer of 1950 the Cougar men’s basketball team took its first trip abroad—a 33-day tour of South America.