A Fling for Dancing Folk

After 50 years of sharing heritage, BYU folk dancers have created a legacy of their own. 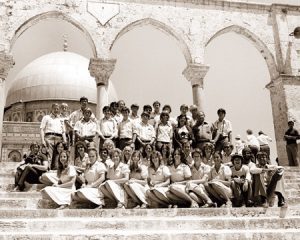 For 50 years the International Folk Dnace Ensemble has performed around the world–including in Jerusalem in 1976 (above). The group was selected to perform in this year’s Homecoming Spectacular, and its founder, Mary Bee Jensen, was tapped as the parade’s grand marshall.

When more than 300 alumni and students gathered to celebrate the BYU International Folk Dance Ensemble’s 50th anniversary for three days in July, the most frequent “dance step” they performed was the bear hug.

“It did not matter whether we had known each other as students or whether we had performed decades apart, we had to hug,” says Edwin G. Austin (BS ’78), who danced with the group in the 1970s and has served as its director since 1985. “We all felt connected in our hearts because of our folk dance experiences. Our time together was a real college highlight. We sweat, worked hard, and had a lot of fun. We felt a real spirit that we shared through our performances. That spirit reemerged during our affinity reunion.”

Mary Bee Jensen (MRE ’63), who also attended the summer gathering, organized the folk dancers in 1956 with six couples. By 1964 she had developed enough contacts to direct an international folk dance tour. She was so committed she took out a personal loan to make it happen.

“Folk dancing changed my life,” says Dennis W. Hill (BS ’84), who served as Jensen’s assistant director from 1975 to 1985. “Mary Bee made me the person I am, and I love her for it. She’s like my second mom. I learned to challenge every facet of my life, and she dared me to dream and set my standards high.

“I can remember being in the middle of the desert by the Red Sea in a navy blue suit while climbing Masada,” he says. “At the time I wondered why I was doing it. When we got up there, there were press people, and I remember Mary telling us that no matter where we go, we represent the Church, the school, the United States, our Heavenly Father, and ourselves.”

Karl E. Wesson (MA ’75) adds, “Mary Bee has a way of presenting class. If you danced with Mary Bee’s troupes, you dressed properly, you were on time, and you behaved well because that is just what she expected. She was a great example to us all.”

Sara Lee Gibb (BA ’59), dean of the College of Health and Human Performance, says, “To have any kind of an entity last for 50 years anywhere and only get stronger is significant. This group is one of the best tools the university and Church have to show what this culture is all about. The value of folk dancers is what these students give to the world.”

As alumni discussed their time at BYU, many suggested that one reason the International Folk Dance Ensemble may have thrived for a half century is because it has had only two directors, both of whom have a passion for dance. “I always loved expressing joy through dance,” Jensen says, “and I’m still looking for the next adventure.” Active in international folk dance organizations, she performed to a cheering crowd in Poland as recently as three years ago.

“I came to BYU with the folk-dance bug,” Austin says. In high school he carried around records of folk music and performed at assemblies.

Brent W. (BS ’90) and Maria Dinsdale Lewis (BS ’88) organized the reunion and developed a folk dance Web site with message boards, events calendars, and historical information (byufolkdance.com). Austin says the reunion was a great success. “We had so much fun that people kept asking us when we were going to have another reunion.”

Jensen adds, “There is an invisible bond that ties folk dancers together and a spirit that emanates from each one. When we saw each other, the years just vanished. We are a family, and we recalled some of the best times of our lives.”