A Flag of Tribute

As she was moving to California, Jennifer Davis McCleve (BS ’86) parked her U-Haul in front of Norton Air Force Base for a quick interview about becoming a flight nurse.

“I remembered a teacher at nursing school saying the military was a great way to have an adventure and see the world.” Her “quick interview” has become a 23-year career that has taken McCleve around the world. She remembers her alma mater fondly, and she paid tribute to BYU by giving the College of Nursing a flag flown over Joint Base Balad Air Force Theater Hospital in Iraq. 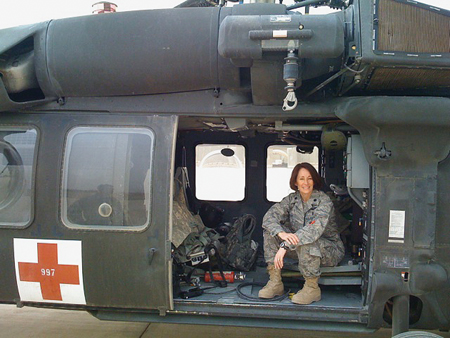 In a letter accompanying the flag to BYU, McCleve expressed her gratitude for the contribution BYU has made to her and her family—her husband, parents, and many other family members have attended BYU as well. “Thank you for your high standards of education, morals, and compassion; your nursing program is what gave me the forward leap to be where I am today,” she wrote. McCleve says the hospital where the flag flew is “the most advanced forward-operating combat hospital in the history of warfare.”

McCleve’s first mission was in December 1990, when she received a call on her answering machine telling her she had volunteered for war in Operation Desert Storm. Since then McCleve has been deployed six times throughout Europe, the Middle East, and Africa. She has shared tents with camel spiders and has spent time in much nicer accommodations in big cities.

“The wonderful thing about nursing is that it is so diverse with so many opportunities to discover and spend time exploring,” she says.

On slow days during the First Battle of Mogadishu, she conducted inventory on supplies left over from the Vietnam War. Other deployments required Mc-Cleve to serve as both flight nurse and ground nurse and deal with the most severely injured patients. Through it all, she has met and helped hundreds of soldiers. “I remember so many faces and stories,” McCleve says.

In 1999 she married Todd S. McCleve (BA ’85), and she alternates a normal suburban life with international deployments. On her last deployment, in Germany, she was able to take her husband and youngest stepson.

A Royal (and Navy) Army

BYU has a new master's in religious education for military chaplains. Here's how that changes things.