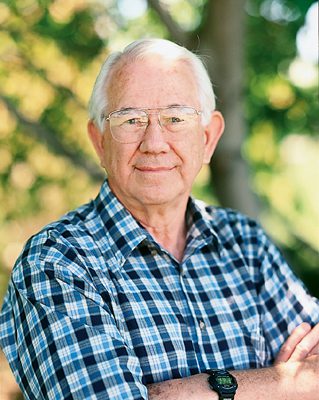 James May’s face is not nearly so well known as his voice. Through the telephone registration systems of three dozen schools, as well as through various Church productions, May has spoken to perhaps millions of people.

JAMES A. MAY, ’60, has been heard by thousands of people who likely will never meet him. Since 1984 the Provo resident has been the voice of BYU‘s telephone registration system.Until online registration recently became an option, BYU‘s student body routinely registered for classes via the telephone and heard May’s mellow tones either admit them or turn them away from specific courses. Many still do, but the phone system is being phased out, bowing to newer technology.“When we needed a voice for our phone system, we tried many: younger versus older, male and female,” says Erlend D. Peterson, ’67, dean of admissions and records. “We assembled a student panel to evaluate them. Although a sweet, motherly storytelling voice got top marks, they chose Jim’s voice. They trusted it. He had been a radio announcer and is a great speaker. In fact, when touch-tone registration software was introduced on other campuses, the administrators of 35 schools liked Jim’s voice so well they picked up his voice and had him record whatever additional material they wanted. I guess you could say his voice has been heard across the country.”“When my kids were at BYU,” May remembers, “they would call the system and say, ‘Come on, Dad, let me have that class.’ At night they would joke that they were really mad because I didn’t let them in. It’s been fun for us.”May’s voice has been his calling card. Perhaps he suspected it would be when he majored in speech at BYU and graduated in 1960. Public speaking had been an ambition of his for a long time.“I listened to Music and the Spoken Word with Richard L. Evans during my West Central States Mission and would say to myself, ‘Oh my gosh, I would give almost anything if I could do one of those,'” he says. Fortunately he also had a fine singing voice, and in the early 1980s he queried his college friend Jerold D. Ottley, ’61, then director of the Mormon Tabernacle Choir, about choir membership.“I asked Jerold how long the line was to get into the choir. He said for women, the line was around the block 10 times, but for men with deeper voices, the line was shorter.”He was in the Tabernacle Choir for 10 years and eventually got his chance to narrate the popular Sunday program. He was one of three backup voices for Music and the Spoken Word and offered the message three dozen times.“It scared the dickens out of me, but it was a great joy,” he says. “Here I was in the Tabernacle in front of an audience and being televised everywhere. I always worried that I would sneeze or make a mistake. One time the TelePrompTer locked up, and I realized why I carried a notebook. My eyes raced to the correct spot and I started reading. When I asked one of the technicians how bad I had been, he fortunately didn’t realize anything had gone wrong.”May is a former seminary teacher and bike shop owner. In 1993 he retired from the LDS Motion Picture Studio in Provo, where he worked for more than 20 years and where he used his vocal talents occasionally. His voice has been heard in many productions for the Church’s seminary system; as part of the Mormon Miracle Pageant in Manti, Utah; and in the Church temple ceremonies.

Not the End of the Universe

You Are What You Do

Sweet Above All That Is Sweet

Sister Sheri Dew speaks of grace: what it is, how it applies to us, and how we can access it.