A Center for Learning 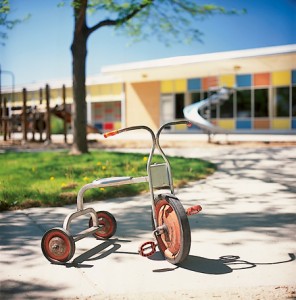 For more than 40 years, the SFLC’s pre-school, classrooms, and hallways sheltered learners.

For more than four decades, the Smith Family Living Center housed caring communities of learners.It’s really a snapshot more than a memory. I remember the sounds and my feelings, and I remember the brick wall. But I don’t remember where I was going or what was on my mind. I simply remember the moment. I was hurrying south between the library and the Smith Family Living Center, and I heard the squeaks of an old swing set and the squeals of delighted children. I continued on, stresses looming, but I longed to stop and join the play on the other side of the orange-brick wall.The BYU preschool has always been an intriguing mystery to me—an island of childhood reverie amid the serious, stressful scholarship of a university.I finally visited the preschool this spring as its staff was preparing to move. The Joseph F. Smith Family Living Center (SFLC) is being demolished this summer, so the preschool and everything else in the building was being relocated elsewhere to wait two years for the replacement structure to be built. (See “Construction Begins on New Joseph F. Smith Building,” p. 6.)In the preschool offices, an old, metal-gray tricycle rested near the office door of Jean M. Larsen, ’53, professor of early childhood education. Inside, Larsen sat near shelves still full of child development books.Larsen first taught in the BYU preschool as a graduate student in 1959, about two years after the new SFLC opened. She took up residence as a new faculty member in 1960, and she has seen additions, remodels, and five university presidents. She claims to be the SFLC dweller with the longest tenure, and after 42 years, she’s retiring.As I visited Larsen, she told me about the aspects of effective early childhood education—things that make a difference in young minds and lives. She discussed parental involvement and mentioned experiential learning. She also cited another element: “a caring community of learners.” She was talking about the preschool and 4-year-olds, but her comment could apply just as well to the Smith Family Living Center. Countless professors and students—myself included—have discovered caring learning communities in these tiled halls. The one I remember most included Chaim Potok and Viktor Frankl.As a recently returned missionary, I had only vague notions about a future career. I enrolled in Career Education 115: Life Planning and Decision Making and joined other lost souls in a classroom at the west end of the SFLC.There, while outside light and sounds tempted us from high windows, we discussed relationships and values. We read Potok’s My Name Is Asher Lev and discussed identity development. We studied Frankl’s Man’s Search for Meaning and learned that the greatest freedom is the ability to choose one’s attitude. I will always remember the SFLC for those two books and their authors.During the next few years, like most anyone who has climbed the Maeser Hill steps since 1957, I had various reasons to be in and around the building. There were add/drop lines in the step-down lounge and dances on the patio. For others the building has hosted meals in the Elizabethan Dining Room, warm shortcuts across campus, church meetings, and a multitude of classes. The Smith Family Living Center has been one of the workhorse buildings on campus for more than four decades.Walking through the SFLC one March morning, I realized just how well the facility has been used. Halfway down the second floor’s main hallway, a class sang “Joseph Smith’s First Prayer” in Spanish. At the end of the hall, a short, white-haired professor wearing a white lab coat and squeaky shoes pushed a cart loaded with ingredients and kitchen supplies to her waiting class, while around the corner, students watched from wooden theater chairs as a professor drew lines and letters on the chalkboard in a computer science class. One floor down, someone talked about body fat to muscle ratio, and a crawling child explored the stairs to the step-down lounge.I sat on the planter near the lounge and happened to look up. Warped ceiling tiles ran down the hallway. Elsewhere, electrical and mechanical problems had combined to dictate the building’s end. Regardless of the lessons and experiences the SFLC afforded so many for so long, the building was tired. Generations had walked these halls.Near the east end of the building I paused in a side hallway before a brown door. Through the closed portal came the familiar, cheerful sound of children’s voices—children who were learning.

Deeply impressed by an experience, Kristie Kay Woodland started thinking about how she could serve internationally.

Graduate student Jenny Ricks builds bridges of communication through involvement on campus and around the world.