A Building to Connect the BYU Family

For decades alumni leaders have led the charge a new home for the extended BYU family.

When then–Alumni Association president Carr C. Krueger (BS ’85) first heard BYU was going to build a new alumni building that would also serve the school’s many visitors, he had to bite his tongue to avoid sharing the news until official word came from President Cecil O. Samuelson.Within minutes of the president’s announcement in October, Krueger went to work. He drafted a pledge statement for Alumni Association board members and Alumni Relations employees that read, “I am excited about the Gordon B. Hinckley Alumni and Visitors Center, and I will make a significant contribution.” He invited their signatures and took a full page of names to President Samuelson later that afternoon.“The alumni were asked to raise $10 million, and I personally committed us to that goal,” he explains. “I ended my tenure as president in April, but I will remain active in this effort until the $10 million is raised. Former board members, chapter chairs, and current officers have stepped forward to contribute, and 100 percent of the alumni board has pledged.”Not only the board, but thousands of other alumni have embraced the project. In the first six months following the announcement, nearly 25,000 alumni stepped forward with gifts and pledges. With nearly half the alumni dollars in hand plus the contributions from the BYU President’s Leadership Council and other donors, BYU has received the go-ahead to break ground on June 23, 2006, the prophet’s 96th birthday.Krueger recognizes the privilege of contributing to the building, as does J. Craig McIlroy (BA ’78), the new Alumni Association president. McIlroy felt inspired to help with fund-raising projects when he heard a talk at Aspen Grove by Elder Henry B. Eyring of the Church’s Quorum of the Twelve Apostles.

“Elder Eyring told us the mission of BYU is synonymous with the mission of the Church. He added that many projects can move forward whenever we increase our revenue flow. This allows the work to move much more rapidly, and I’m here to help things move,”McIlroy says. “We’re halfway to our goal on the Hinckley Building in a short period, but the second half is often the most difficult. This is the time to stay tightly focused. And while we are certainly interested in sizeable gifts, we are most interested in letting everyone participate in the success of a project that honors our beloved prophet.” 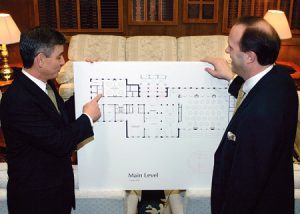 Craig McIlroy (BA ’78) and Carr Krueger, the incoming and outgoing alumni presidents, discuss plans for the Gordon B. Hinckley Alumni and Visitors Center.

Krueger and McIlroy acknowledge they merely represent a long line of alumni leaders committed to this objective. The need for a new building has been evident at least since the late 1980s, and alumni presidents have devoted significant effort to the dream of a facility that would better connect alumni, visitors, and students to the university.“We wanted to create a link between our alumni and the student body,” says Diana Hulme Peterson (BA ’72), a former Alumni Association president. “Our students are considered alumni, too, and as we realized all the work we had to do to join with them, the need for a new space just called out to us.”Like other alumni leaders who have carried the vision of a new building through the years, George H. Bowie (BA ’76), a former Alumni Association executive director, is pleased with the plans for the new center. “We’re going to have a building that’s worthy of all our objectives,” he says.

The Unknown Variables of Healing

A BYU math professor is using complex equations to help solve the problem of scarring.