THERE is no doubt about it—we live in the golden age of the Latter-day Saint serial novel. How does one account for Latter-day Saints’ turn-of-the-millennium fondness for the multi-volume historical novel? Perhaps it is because we are so intensely aware of the history of the Restoration and our participation in the prophetic destiny of the gathering of Israel. Perhaps it is the hunger of serious-minded Saints for learning in time for eternity, which, when combined with the spoonful-of-sugar-makes-the-medicine-go-down principle, yields a tasty plateful of history garnished with color, flavored with excitement and verve, and spiced up with a dash of romance. For whatever reason, Latter-day Saints are presently deluged with historical novels written and read on the installment plan—and who is steel-minded enough to read volumes one and three and omit two and four? It would be like love without marriage, a tieless missionary, or BY without U. Orson Scott Card, ’75, really started it all with his bold reimagining of Joseph Smith Jr. as Alvin Miller Jr. in his Tales of Alvin Maker series (five vols., 1987–98) and his reimagining of Nephi (Nafai) and extended family in his Homecoming series (five vols., 1992–95), a sci-fi retelling of Book of Mormon journeys on a distant planet. But it was Gerald N. Lund, ’65, who, in his landmark series The Work and the Glory (nine vols., 1990­98), riveted the attention of hundreds of thousands of Latter-day Saints to rediscovering their history through fiction. Now, at the beginning of 2003, LDS readers, sobered and shaken by the world events of 2001 and 2002, turn for a sense of spiritual stability, control, and refreshment to, among other proven comforts, a number of series of historical fiction—most of them written by BYU alumni. 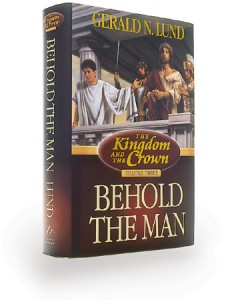 The Big Three master writers of historical fiction are still producing. Orson Scott Card’s Shadow Puppets (New York: Tor, 2002; 348 pp.; $25.95) is the sci-fi sequel to Ender’s Shadow. Gerald N. Lund, now one of the Seventy, in Behold the Man (Salt Lake City: Deseret Book, 2002; 682 pp.; $26.95), completes his The Kingdom and the Crown trilogy about the life of the Savior by focusing on the last days and hours of His mortal life. Dean T. Hughes’s Troubled Waters (Salt Lake City: Bookcraft, 2002; 419 pp.; $22.95), volume 2 in his Hearts of the Children series, continues the gripping story of LDS life in the ’60s. Ronald G. Carter, ’57, in The World Turned Upside Down (Salt Lake City: Bookcraft, 2002; 517 pp.; $25.95), volume 6 of his Prelude to Glory series, concludes the series and the Revolutionary War with the British surrender at Yorktown. David G. Woolley advances his Book of Mormon story in The Power of Deliverance (American Fork, Utah: Covenant Communications, 2002; 629 pp.; $24.95), volume 2 in his Promised Land series. Nancy Campbell Allen presents volume 2 of her LDS Civil War saga, Faith of Our Fathers, with To Make Men Free (American Fork, Utah: Covenant Communications, 2002; 368 pp.; $22.95). Veteran novelist Robert D. Marcum, ’72, chair of religious education at BYU—Idaho, launches a new series, House of Israel, with The Return (American Fork, Utah: Covenant Communications, 2002; 437 pp.; $22.95), a novel about Hannah Gruen, a young survivor of Ravensbrück, and her struggle to find passage for herself and others to Palestine, with the help of an American LDS pilot, Ephraim Daniels. And finally, popular romance writers Anita Stansfield, Susan Evans McCloud, and Rachel Ann Nunes offer several series to their devoted fans. While we’re talking about fiction, let me call your attention to three (non-serial) novels. In her fourth novel, Fields of Clover (Springville, Utah: Salt Press, 2002; 282 pp.; $16.95), Marilyn Arnold, ’57,BYU professor emeritus of English, follows middle-aged siblings Everett, Stella, and Joshua in their individual responses to the impending deaths of their 93-year-old father, Oscar Carpenter, deep in the fog of senility, and their 90-year-old mother, Edith, still sharp-minded and alert. I strongly recommend this novel for all mature adults equipped with siblings and aging parents. This is a worthwhile book about family that sticks to the soul. BYU English professor Christopher E. Crowe, ’76, in Mississippi Trial, 1955 (New York: Phyllis Fogelman Books, 2002; 231 pp.; $17.99), recounts, through the fictional eyes of white, 16-year-old Hiram Hillburn, the true story of Emmett Till, a 14-year-old, African-American boy from Chicago, who in August 1955 was kidnapped and murdered for allegedly whistling at a white woman in Bryant’s Grocery and Meat Market in Money, Miss. His murderers, who later confessed their crimes, were found not guilty by an all-white jury and went unpunished. Says Hiram: “Some awful things happened to a Negro kid named Emmett Till, and I was right in the middle of it, smack in the heart of crazy, senseless hatred” (p. 2). Crowe indelibly recounts a story “that must be known by all Americans” (dust flap). In her first novel, Finding a Mother (Orem, Utah: Sunrise Publishing, 2001; 251 pp.; $12.95), Lola B. Latham Walters, ’68, tells the story of little Jane Doe, a foundling left at the door of the White Rock Shelter Home in Montana in the depths of the Great Depression. Finding a Mother is a kind of David Copperfield or Anne of Green Gables story that follows a little girl on her hopeful and often frustrated quest for a family that will adopt and love her. 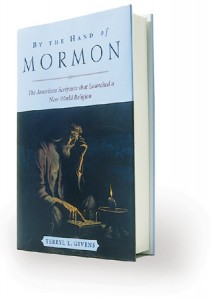 Turning to nonfiction, I recommend By the Hand of Mormon: The American Scripture That Launched a New World Religion (New York: Oxford UP, 2002; 320 pp.; $30.00), a landmark study of the Book of Mormon, the likes of which we haven’t seen since Hugh Nibley’s classic Lehi in the Desert and the World of the Jaredites (1952). Author Terryl L. Givens, ’81, professor of English at the University of Richmond (Va.), declares it high time for the world to take the Book of Mormon and its contents seriously and undertakes to “examine the initial shape and subsequent transformations of the Book of Mormon, how it has been understood, positioned, packaged, utilized, exploited, presented and represented, by its detractors and its proponents” and to survey the book’s “shifting relationship to LDS doctrine and proselytizing, its changing status and reputation among theologians and scholars, and explore what impact its obtrusive presence may have on Christian conceptions of scripture, of revelation, and of the canon” (p. 6) of holy writ. In carrying out this design, Givens declares that the profound contribution of the Book of Mormon is “the insistent message that revelation is the province of everyman” (p. 221), that the book “emphatically models, chronicles, and then enacts a version of diving discourse” that frames and pervades the work (p. 208) and “may well be the Book of Mormon’s most significant and revolutionary . . . contribution to religious thinking” (p. 221). Givens has masterfully delved, thoughtfully examined, and convincingly presented what seems to me the finest discussion of the Book of Mormon as divine revelation, as holy writ, as evidence of Joseph Smith’s authority, as “a vehicle for the Mormon conversion experience,” and as “a divine sign of the end times” (p. 176). Finally, I mention Rodger Dean Duncan, ’70, and Ed J. Pinegar’s important Leadership for Saints (American Fork, Utah: Covenant Communications, 2002; 359 pp.; $19.95). After defining leadership, the authors discuss leadership theory and practice; how to plan for desired goals; the communication, delegation, and leadership skills needed; the power of the Spirit and personal spirituality necessary for leading others; and some “humble” answers to pertinent leadership questions. Duncan and Pinegar support their points with a treasury of statements on leadership from LDS leaders, with practical applications and suggestions for further reading. Good reading to you!

Marriage & Families is a journal published three times a year by BYU’s School of Family Life. Dedicated to strengthening families, the publication includes articles by BYU professors as well as other family experts. Here are descriptions of some of the articles in the September 2002 issue.“What Children Really Need: Another Way to Look at Children’s Rights,” by Allan Carlson.This article discusses 10 factors that are essential for children to be happy and healthy. These include the right to have parents, siblings, and a religious faith. “The Pornography Trap,” by Victor B. Cline and Bradley R. Wilcox, ’85.Pornography’s addictive nature and negative consequences are explained in this article, as are the steps for overcoming such an addiction. “A Senator Speaks on Society, Law, and the Family,” by Senator Gordon Smith, ’76.In a speech given at BYU, Senator Smith discusses the impact of laws on families and talks about his experiences maintaining his personal morals and beliefs while acting as an elected representative of the public.

The Best of Buddies

Chetty Pino, the longest-standing buddy in BYU’s chapter of Best Buddies International, knows how to be a real friend.

Why do dietary recommendations keep changing? We ask an expert.