The founder of Facebook fields student questions in a forum emceed by a senator. 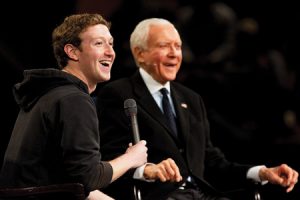 Mark Zuckerberg, founder and CEO of Facebook, revolutionized the world through his 600-million-strong social media site but had never addressed a university-wide audience until Senator Orrin Hatch (BA ’59) invited him to speak at BYU. In a special university forum in March, Hatch and Zuckerberg sat in front of an audience of more than 10,000 to discuss questions submitted by students to BYU’s Facebook page. “When we were getting started at Harvard, I remember I had these conversations with a lot of my friends,” the 27-year-old CEO, donning a hoodie and drinking orange juice, told the crowd. “The things that we used to talk about when we used to go out and get pizza . . . [were] about how different the world was going to be when people could connect more through the Internet.”

Below are excerpts from his comments.

Hatch: What advice would you give to budding entrepreneurs? 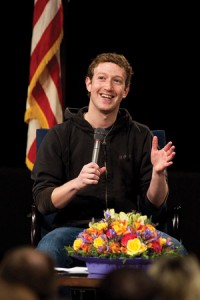 Zuckerberg: If you don’t completely love and believe in what you’re doing, it actually ends up being the rational thing for you to stop doing it or succumb to some of the challenges, because there will be huge challenges. . . .

The founding principles of Facebook are that if people have access to more information and can be more connected, then that will hopefully make the world better, right? It will make it so that people can have more empathy, can develop and maintain more relationships; they’ll have more understanding; they’ll have access to more information that they want. And that’s really the guiding principle for me. And on hard days I really just kind of step back, and that’s the thing that keeps me going.

Hatch: Is management or marketing more important in predicting the success of a new business?

Zuckerberg: By management, do you mean people? Because I think that’s probably the biggest predictor. . . . Now I think one thing that gets blown out of proportion in our culture is the emphasis on the single person or the couple of people who are running something. A lot of people might know who I am, but the success of Facebook is really all about the team. . . . We’re able to serve so many people—I mean, it’s more than half a billion people now—but the company only has around 2,000 people. If you think about that, that’s kind of staggering. And how do you do that? I think the answer to that question is you make sure that every person that you add to your company is really great.

Hatch: Did you ever envision Facebook as the catalyst for reform that it’s become?

Zuckerberg: In a way, the Internet just gives everyone a voice, right? I mean whether it’s Facebook or something else that you’re using, people now have an ability to share something, put their opinion out there, and have people hear it in a way that just wasn’t possible 20 years ago. . . .

One of our engineers, for fun, put together this site, peace.facebook.com, and what it does is it maps out the friendship connections that are being created on a day-to-day basis between countries and regions that historically have had very tense relationships. . . . And I just have to think that over the long term, that’s going to create more understanding between countries, more reasonable policies, more empathy, and just a greater understanding of how we all are connected; because we are [connected], I just don’t think we fully understand it yet.

View the forum in full at on.fb.me/BYUZuck.

Today it seems that everybody online wants to know all about you. BYU experts share how to secure your online life.