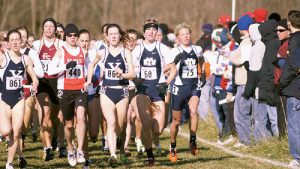 Michaela Mannova (No. 75) was BYU’s top finisher and fifth overall while Kassi Andersen (No. 68) finished seventh.

JUST as its team cheer says, the BYU women’s cross country team ran “as fast as Cougars” to win the 2002 NCAA Cross Country Championships, hosted by Indiana State University on Nov. 25. BYU successfully defended its 2001 NCAA title with a total of 85 points, giving the team its first back-to-back national titles. Stanford finished second with 113 points. “It will make Thanksgiving turkey taste really good,” said women’s head coach Patrick Shane, ’68, after the race. “The girls ran a great race; they really ran their hearts out. It is always a thrill to win a national championship, and it is really exciting to win back-to-back championships.” Just minutes after the 6K race ended, the announcer declared Stanford the winner, based on the unofficial results. However, during the review process NCAA officials found that a BYU runner had not been counted properly; 20 minutes after the race ended, the announcer declared BYU the official winner. Michaela Mannova, ’04, a junior from Kralov, Czech Republic, was the top finisher for BYU and fifth overall with a time of 19:49.5. “I could not have had a better race,” Mannova said. Kassi Andersen, ’05, a redshirt freshman from Provo, finished her dream season with a seventh-place finish overall and a second-place finish for the Cougars. “We did all we could, and, fortunately for us, it was enough,” Andersen said. Also scoring for BYU were Katie B. Martin, ’03, of Freemont, Calif. (20th); Breanne Sandberg, ’06, of Rancho Palos Verdes, Calif. (41st); and Jaime Lynn Cottle, ’03, of Howell, Mich. (46th). Shane was named NCAA Women’s Cross Country Coach of the Year, his third such honor in his 22-year BYU career. “You can’t be named coach of the year without great athletes and a great support staff,” he remarked. “It’s really a tribute to our team.” The BYU women’s cross country team has dominated the NCAA tournament in recent years, winning four of the last six titles. The Cougars won the championship in 1997, 1999, 2001, and 2002 and took second in 1998 and 2000. Since the 1995 season the Cougars have not finished lower than fourth. Stanford won the men’s 10K cross country race, scoring 47 points to runner-up Wisconsin’s 107, while BYU finished 16th with 443 points.