Witnesses in the Starry Heavens

From out of the misery of a cold, dark, comfortless jail cell in Liberty, Mo., Joseph Smith asked a poignant question that each of us is likely to ask sooner or later: “O God, where art thou?” You probably recall the context of Joseph’s question. The Saints had been driven from their homes in the cold of winter, and the whole Church had been brought near destruction.

In response to Joseph’s question, what -comfort did the Lord have to offer? If we turn to D&C 121, we find the answer. There, among other things, the Lord comforts Joseph and the Saints with promises of great knowledge:

All thrones and dominions, principalities and powers, shall be revealed and set forth upon all who have endured valiantly for the gospel of Jesus Christ.

And also, if there be bounds set to the heavens or to the seas, or to the dry land, or to the sun, moon, or stars— 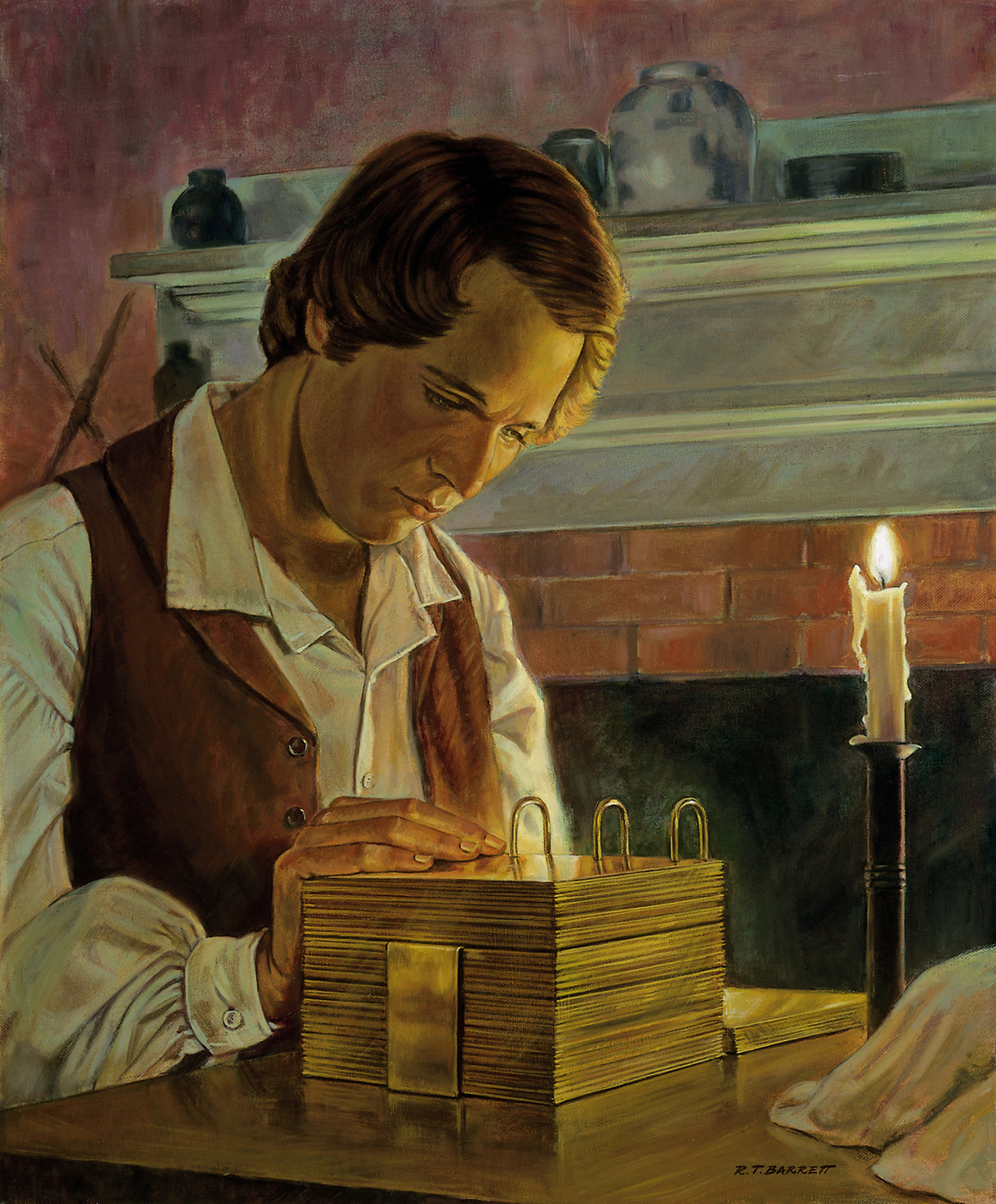 From this passage, as well as from other revelations to Joseph, it is clear that knowledge is something God values greatly. But let’s consider what comfort we can hope to find in knowledge. Surely knowledge of the gospel itself can comfort and inspire. But can so-called secular knowledge do so as well? When you stop and think about it, it probably should. All truth comes from God; He doesn’t make the distinction between sacred and secular truth as we sometimes do. To Him it is all one—it is all truth.

So what kind of so-called secular truth might one turn to for comfort? Let’s look to the stars.

I’m amazed at the fulfillment of the promise given to Joseph Smith in D&C 121 that during the term of this dispensation, much will be revealed about the stars, planets, and the world in which we live. When camping with my kids, I love to talk with them about these things. Our favorite time is at night. Perhaps you can recall being out on a clear night yourself, far from city lights. If you look up, what do you see? A black sky full of stars. Does the sight not fill you with wonder? Now, you might just ask yourself, How many stars can you see?

If you ask your local astronomer how many stars you can see with the naked eye, she’ll likely tell you it’s about 10,000. And for thousands of years that’s how many stars it seemed there were. But in the last century we’ve begun to realize the true scope of this vast universe. Just as the Lord promised the Prophet, new knowledge is accumulating at a breathtaking and accelerating rate.

Probably the most recent and dramatic improvement in our view of the universe results from the Hubble space –telescope. Today we look at a tiny patch of sky that only a few years ago looked like a black, empty spot, and we find that it is full—not of individual stars but of galaxies!

Science has come to this conclusion only recently, but Joseph Smith knew the scale of the universe almost two centuries ago. By revelation and translation, he brought to light the knowledge of ancient prophets like Enoch, Abraham, and Moses who described the immense numbers of worlds in the cosmos. First, let’s turn to Enoch, who is shown the cosmos and says:

And were it possible that man could number the particles of the earth, yea, millions of earths like this, it would not be a beginning to the number of thy creations; and thy curtains are stretched out still. [Moses 7:30]

Further, we learn from Joseph Smith’s translation of Abraham’s record:

And [God] said unto me: My son, my son (and his hand was stretched out), behold I will show you all these. And he put his hand upon mine eyes, and I saw those things which his hands had made, which were many; and they multiplied before mine eyes, and I could not see the end thereof. [Abr. 3:12]

And here is what the Lord revealed to Joseph about what Moses saw:

And he beheld also the inhabitants thereof, and there was not a soul which he beheld not; and he discerned them by the Spirit of God; and their numbers were great, even numberless as the sand upon the sea shore. [Moses 1:28]

Repeatedly in scripture, when the Lord is trying to help us imagine huge numbers of things, He alludes to the grains of sand on the beach. This metaphor is especially fascinating to me because it pops up in another, entirely unrelated place. In his 1980 television series Cosmos, Carl Sagan, a scientist who was not a believer in God, tried to help the viewer understand the enormous numbers of stars there are. Lo and behold, he stated that the number of stars in the known universe is greater than the number of grains of sand on all the beaches of the planet Earth.

Imagine how many stars that represents! Imagine standing on a huge beach, the sand stretching out for miles before you. As you reach down and gather up a handful of sand, you might despair of counting the number of grains just in your hand. Now imagine all the sand on all the beaches. That doesn’t even come close to how many stars there are. This is a really awesome thought! Does it inspire you? It does me. Does just thinking about it take your mind off your problems? It does for me. Perhaps this is what God was talking about when He gave the promise of great knowledge to Joseph Smith in Liberty Jail as a source of love and comfort.

A popular hymn declares, “O Lord my God, when I in awesome wonder Consider all the worlds thy hands have made . . . ; Then sings my soul” (“How Great Thou Art,” Hymns [Salt Lake City: The Church of Jesus Christ of Latter-day Saints, 1985], no. 86). It’s hard for me to stay discouraged when my soul is singing. It’s hard for me to look at the night sky and think of the scale of the universe and be depressed. What God told Joseph Smith and what he has since revealed to mankind through science about the stars has become a source of both comfort and inspiration to us all.

As time goes by and we learn more and more about the cosmos, the more we find so-called secular and religious truths coming together to bear witness of our Father’s great plan. All of this vast, complex universe has been designed for a purpose—one that includes us as very important players. Through Joseph Smith, we know that earth is part of a vast civilization that spans the universe, that men and women are passing through one natural phase in the life cycle of eternal beings who populate the universe in a planned, organized fashion. Knowledge of this plan makes it -possible for us to adopt an eternal perspective. We see life and the problems we face from a whole new angle, and this offers us a sense of hope beyond the confines of this world.

Now, in conclusion, let’s consider the most awesome thought that the Lord revealed through Joseph, that through the power of the Atonement we can be joint heirs with Christ and can inherit all this, “all that [the] Father hath” (D&C 84:38). How much is it that the Father hath? Enoch, Abraham, and Moses had an idea, for it was shown to them. What the Father hath is an awful lot! What a source of comfort and strength and hope that whatever we have to endure, it is worth it. “All that [the] Father hath” can be ours.

Perhaps you find yourself facing great adversity in your life, as did Brother Joseph in Liberty Jail. Perhaps you have felt to cry out, “O God, where art thou?” as did he. The Lord has sent you comfort—many sources of comfort and inspiration—not the least of which are witnesses in the stars that He lives, that He loves you, and that He has set in place a plan by which all that He has -created can be yours if you will have faith and endure, even as Joseph did.

John Lamb is the Eliot A. Butler Professor of Chemistry. This essay is adapted from a devotional address given Jan. 15, 2002. The full text is available online at byu.dev.edu/.

New biographies acquaint another generation with the Prophet Joseph Smith.

BYU’s optical telescope captured a stunning image of Omega Nebula, a cloud in the densest part of the Milky Way Galaxy.