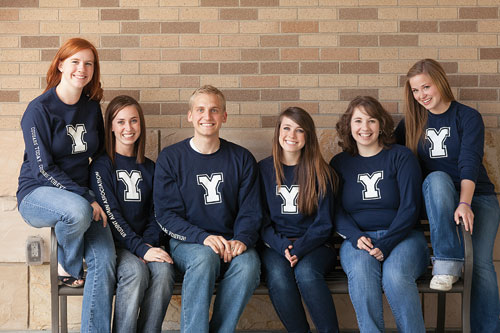 While Steven G. Williams (’11) was serving a mission in Sacramento, Calif., his brother Brian (BS ’09) was busy ensuring Steven would have things to do when he returned to BYU. As vice president of programs for the Student Alumni Association (SAA), Brian volunteered his younger brother to help with various programs—without Steven’s knowledge.

“I’m glad he did,” says Williams, of Centennial, Colo. “It’s my opportunity to give service to BYU while I’m still a student.” Now, nearly three years later, Williams is expanding his service to the school by filling the job of SAA president for the 2010–11 school year.

During his tenure, he will supervise etiquette dinners, the annual BYU vs. Utah food drive, the hike to light the Y, semester survival kits, a networking dinner, the Traditions Ball, a Show Me the Money seminar, college lectures, and Parents Weekend activities. He will also be involved in New Student Orientation, and he is part of a team of students working on the Y Book, a book of traditions that will be distributed to all incoming freshmen and be available for purchase.

Williams sees his role as creating a bridge between a student’s experience and the experience of being an alum. “We have started working closely with other organizations—college directors, specific colleges, and centers for learning and service—to get them to realize they can help further that vision with us,” he says.

Williams is glad to give back to BYU. “I had a remarkable freshman year and had been given some good scholarships,” he says. “I am the youngest of six, and we all attended BYU. It wasn’t a given for me, but when I made the choice, I realized that with the wonderful friends I made, the missionary-preparation classes, and the other great classes, I had taken the direction I was supposed to take.”

With stories from Ernest Wilkinson to Kevin Worthen, alumni share their first-person experiences with BYU presidents.