Turning Up the Volume on Genes

A BYU lab wants to help joint genes express themselves. 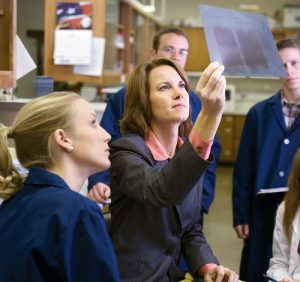 Laura Bridgewater and her team of BYU students have their sights set on understanding gene enhancers, hoping to provide the scientific foundation for a future treatment for osteoarthritis.

It may seem an impolite stretch to compare molecular research to Dr. Seuss. But talking with Laura Clarke Bridgewater (BS ’89), associate professor of microbiology and molecular biology, brings to mind the hero of Horton Hears a Who!Bridgewater and a team of students are paying Horton-like attention to things too small or obscure for most to notice–the fundamental, microscopic inner workings of proteins and genes. Bridgewater knows it’s a long way between figuring out how genes work and treating genetic maladies. But she believes that when her voice is combined with all the other voices of all the other researchers in all the other labs, a picture of a whole world will appear on that dandelion, so to speak, and medical breakthroughs will occur.Actually, Bridgewater’s voice and those of her students have counted for more than their share lately, adding to the understanding of why genes act the way they act and create the tissues they create. The more scientists understand these fundamentals, the brighter becomes the potential to address a myriad of genetic diseases. The contributions of Bridgewater’s lab are being recognized in journals and conferences and funded in part by the National Institutes of Health (NIH). Utah Republican Women recently honored Bridgewater as one of “Utah’s Winning Women.”The opponent Bridgewater is currently most determined to undermine is osteoarthritis, a breakdown of cartilage in joints that affects some 21 million Americans. While it can be triggered by injury, there also is a strong genetic component.“You can have two people with the same level of activity and the same weight and the same risk factors, and one person needs a knee replacement at age 50 and the other person’s knee lasts his whole life,” Bridgewater points out. “When you control for everything else, that difference is a genetic difference.”

Bridgewater’s primary focus since her postdoctoral days has been the role of little-understood gene enhancers. Scientists know this much about them: While DNA provides codes for RNA, which provides codes for protein, enhancer elements support DNA from the sidelines. Instead of providing codes for protein, these gene sections enhance the coding parts of the gene so that more RNA and protein are produced.“I like to think of it as turning up the volume on the gene so you can get more RNA and more protein made,” says Bridgewater. “It increases expression.”Understanding how the genes in cartilage are turned on and off and how the volume–or expression–is turned up or down may open doors for new treatments or even prevention and cures.Bridgewater’s research emphasis is on the mechanisms controlling the tissue-specific expression of collagen genes in cartilage. While a postdoc at the M.D. Anderson Cancer Center at the University of Texas, Bridgewater discovered three specific enhancer elements in one particular cartilage gene–Type XI collagen. Since then, she has been trying to determine what specific function each performs.One of her recent discoveries, published in the journal Matrix Biology, shows that a newly discovered collagen gene, Type XXVII, contains enhancers that are related to Type XI enhancers and that similarly activate gene expression in cartilage but not in other tissues. This finding is critical, since understanding how to promote tissue-specific expression of genes will be essential to eventually creating a treatment for sufferers.“A huge challenge with gene therapy is that when you insert the gene, you want it to be active in the cells where it needs to be active and not elsewhere,” Bridgewater explains. “If someone is designing gene therapy for arthritis, trying to repair cartilage, we don’t want it turning on cartilage genes in skin. It has to be active only in the tissue where it is needed.”Bridgewater acknowledges that it is a long stretch between these first forays into understanding how gene enhancers function and creating workable gene therapies. However, Mark Alfenito, president of KaloBios Pharmaceuticals in Palo Alto, Calif., says pharmaceutical and biomedical companies actively seek out this kind of research to develop treatments for a wide range of diseases.“Every hormonal balance, every vitamin balance, every biological balance has an up state and a down state,” he says, noting that understanding enhancers is essential to developing various treatments, whether genes need to be turned up to produce cartilage tissue in osteoarthritis sufferers or turned down to reduce overactive proteins in rheumatoid arthritis sufferers. 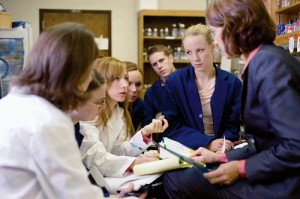 Jenny Felin (center), a research associate, is working to identify proteins that help regulate genes during cartilage development. Each member of Bridgewater’s lab team, including undergrads, has a scientific question to answer.

The complexity of these enhancers is being unraveled, bit by bit, in Bridgewater’s lab. “We know where they are; we know what they do; but how do they make it happen?” is the question that now drives the research in her lab, crewed by a research associate, a doctoral candidate, a master’s student, and about 10 undergraduates. To answer this, each student, including the undergrads, have their own subset of questions to work on.“They are not just in there observing or washing glassware,” Bridgewater says. “They actually have a scientific question, and they have to go into the lab and answer it.”Bridgewater says she expects exceptional work from her students and gets it. Working closely with each student to guide the research, she says she is amazed at their intelligence and contributions.They are already making an impact in the body of molecular biology research, with more findings soon to be published. Master’s student MaryAnn Mower Genzer (BS ’04), from Germantown, Tenn., will publish new evidence of how a particular protein interacts with enhancers. PhD candidate Jaime L. Mayo (’07) from Idaho Falls, Idaho, will soon publish a paper identifying another protein that plays an integral role in cartilage development.

Bridgewater’s lab knows where gene enhancers are and knows what they do. Now they want to discover how they work.

Along with these findings, Bridgewater and her students have recently identified a new gene that has similar enhancers to those found in the Type XI collagen and have uncovered new information on another already well-studied protein.Bridgewater attributes the dynamic nature of her lab, with the abundant opportunities it provides students, to the funding the lab has been awarded– a $200,000 grant from BYU benefactors Ira and Mary Lou Fulton and a $900,000 grant from the NIH.Bridgewater knows her efforts alone aren’t enough to make a large impact in the endlessly complex world of genetics. She says the greatest product of her lab may end up being the students she trains. “They are going to change the world because they are so capable.“Even if my own research is a drop in the bucket, which it will be,” she says, “the students I influence are likely to be a much more lasting legacy.”