The Sound of Healing 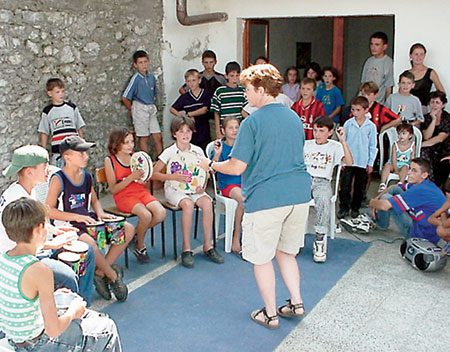 Teaching music to children in war-ravaged Kosovo, Elizabeth Shropshire has offered hope and healing to thousands, while finding friendship and fulfilment for herself.

THE children still wake screaming. They still have nightmares about what they’ve seen. Some still live in the tents they were forced into years ago. And Elizabeth Shropshire, ’84, a BYU music composition graduate from Los Angeles, still teaches these children in war-ravaged Kosovo how to play the pennywhistle.

Four years ago Shropshire started a foundation to help Kosovar children emotionally heal in an unconventional way—by teaching them the basics of music.

It started one day when Shropshire was at a piano student’s home in California. She heard a public radio report about Albanian refugees from Kosovo suffering from the aftermath of ethnic cleansing by Serbian forces. Slobodan Milosevic and his armies had razed villages and committed horrific atrocities against unarmed civilians, including children.

Shropshire was moved. That day she cancelled a vacation to Austria.

“I thought, Instead of going on vacation for me, I could help.”

Within a year, Shropshire started the Shropshire Music Foundation in Gjakova, Kosovo, with the belief that teaching a child to play a simple instrument can build self-esteem.

“These children have gone through such terrible, terrible experiences that it’s really sort of crushed them psychologically,” says Allen W. Palmer, ’70, a BYU associate professor of communications who met Shropshire in Kosovo last year. “She sees music as a way to lift them out of a sense of depression and foreboding.”

Shropshire and a handful of local volunteers have taught more than 3,000 children in a place where the school systems are in shambles and morale is low. She teaches peace and tolerance to her students and relies on God for guidance. One of the biggest misconceptions about Kosovo, she says, is that it is still dangerous.

“It’s totally safe here,” she says. “I feel safer here in Kosovo than in Los Angeles,” adding that she feels especially welcome because she is an American.

“Right after the war, when somebody I’d meet would find out I was an American, they’d start to cry. They’d say, ‘If there wasn’t an America, there wouldn’t be a Kosovo, and I would be dead and my children would be dead,'” she says.

When she is in Kosovo, Shropshire teaches classes six days a week. Once a week she visits camps where people remain homeless and live in makeshift tents. Most have lost members of their family to the war.

Shropshire has returned to the United States to try to gain support for her cause. “I’m a horrible fundraiser. I just can’t ask people for money,” she says. “We’ve been able to keep afloat—not very well, but we are surviving.”

She believes the Lord is holding up the project. “Everything I have done in my life was just preparing me to be able do this work,” she says.

Studio C has garnered a massive following on TV and online, thanks in large part to its director.