The Silver Screen in a Thousand Tongues 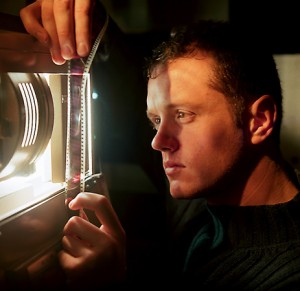 IT’S nine o’clock on a Friday night, but a steady stream of several hundred students is entering the Kimball Tower. They gather in the theater; some talk quietly, some munch on snacks, some have their arms around dates. This is no night class, no review session; this is the movies. And as the lights dim and the first subtitles appear at the bottom of the screen, it becomes clear that this isn’t a typical raucous college-town theater. This is International Cinema.As the largest and longest-running foreign film program in the country, International Cinema provides an opportunity that every student should appreciate, says Travis T. Anderson, ’85, assistant professor of philosophy and director of the program. “You’d have to live in Los Angeles or New York and be willing to go all over the city and spend a lot of money to see the kind of films that our students can see here for free.”“When I was a student in the 50s,” remembers Donald R. Marshall, ’60, professor emeritus of humanities, “you would see little signs announcing black and white 16mm films sponsored by one of the language departments. There wasn’t a consolidated program or series back then.” Shortly after Marshall returned to BYU in the early 1970s, this time as part of the faculty, he was put in charge of a fledgling international film program that featured one film, two days a week. Twenty-five years later, he passed this program, greatly enlarged, on to Anderson.Today, International Cinema holds four screenings a day, five days a week. According to Anderson, more than 1,000 people typically attend International Cinema every week. And while International Cinema has become one of the most popular forms of entertainment on campus, education is its primary objective. According to Anderson, the program is intended to supplement the curriculum of the College of Humanities and the Honors Program. “You won’t find James Bond here. We look for films not with entertainment in mind, but education–and spiritual edification, too.”Marshall agrees. “With the greatest films around the world, from the silent films of the 1930s right up to the present day, International Cinema broadens your education of geography, sociology, history, and humanity as a whole.”But finding foreign films that educate and edify isn’t always easy. “Sometimes it’s hard to meet our quota of films. In some languages it’s almost impossible to find a current film that is appropriate for aBYU audience,” says Anderson. Of the 30 to 40 films he viewed at the Toronto International Film Festival in September 2001, only four or five could be considered for International Cinema. “The hot place right now for quality films is Iran. Not only are Iranian films artistically interesting, but because the Islamic code of behavior is so much like our own, they’re perfectly suited to our audience.”International Cinema devotee Trina K. Swanson, ’99, says, “This isn’t the same kind of film you see at the dollar theater. This is accessible culture. With perhaps the exception of the football team, there’s little on campus that inspires the same type of following among students.”