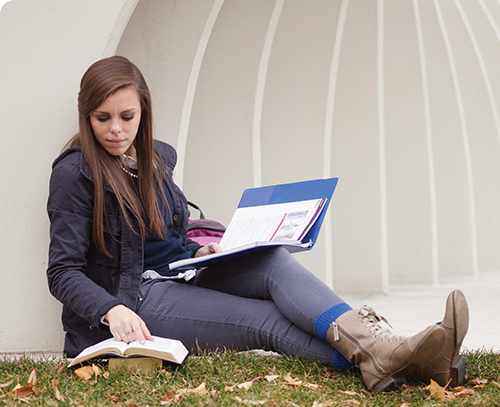 Starting fall 2015, four new religion classes will be required to graduate from BYU, or from any other Church university or institute of religion worldwide.

Three of the four new religion classes have already been taught at the Y: Jesus Christ and the Everlasting Gospel; Foundations of the Restoration; and Teachings and Doctrine of the Book of Mormon were created at BYU and piloted in 2014. Add The Eternal Family, a class now in development, and you have the new religion core.

“We’ve been talking for five years or more about how to better meet the needs of students,” says BYU dean of Religious Education Brent L. Top.

For one, many faculty members were concerned that some students were leaving BYU with holes in their religious education. “Students can graduate without studying the First Vision, which is in the Pearl of Great Price and not a required class, or having never studied the Gospels, because they filled their New Testament requirement by studying the second half of that scripture,” says Church history professor Michael A. Goodman (PhD ’04). “These new courses will help eliminate those blind spots.”

While the old core classes took on one standard work at a time, the new thematic classes will draw from the entire LDS canon, including teachings from living prophets.

It’s an approach inspired in part by Elder David A. Bednar’s (BA ’76, MA ’77) 2007 CES fireside, A Reservoir of Living Water, in which the apostle illuminated three different ways to study the scriptures: in order sequentially; by doctrine or concept; or, deeper, making connections throughout all of the standard works.

In addition, says Top, the BYU student profile is changing. “With the change in missionary age and increased expectations in the seminary program, we realized that our students would come to BYU and religion classes with a stronger foundation in the scriptures. And we needed to be ready to build on that foundation.”

BYU piloted the new courses and relayed feedback to the Church Educational System (CES). Top quickly learned similar conversations were happening at other Church schools and institutes, and a CES task committee was formed.

“I believe the hand of the Lord was guiding us all independently to examine the same things,” says Top.

In a September 2014 vote, a majority of the BYU Religious Education faculty supported instituting a new cornerstone curriculum. With the endorsement of the BYU Board of Trustees, BYU professors are now refining the new curriculum.

“There is a strong sentiment among faculty that these new courses be scripture based,” says Goodman, as these courses will take the place of courses that delved deeply and contextually into the scriptures. The formerly required Book of Mormon, Doctrine and Covenants, and New Testament courses will continue to be offered as electives.

While the approach in the new courses is different, says Goodman, everyone’s desire is still the same: “to help our students draw nearer to Christ and to better prepare them for the future.”

Why a New Core?

Once a simple enrichment activity for Old Testament students, the BYU Passover celebration is now attended by thousands.

From an ancient Christian philosopher to long-lost papyri scrolls, this lost interpretation of Psalms is noteworthy.