The Light of Truth: Reaching BYU’s Potential Requires Your Assistance

By Merrill J. Bateman in the Winter 2000 Issue 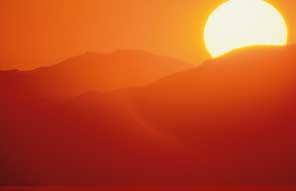 The goal of the university is to be filled with light and truth…and to share that light with the rest of the world.

It is common at graduation time to receive a few student letters expressing thanks for the opportunity to study at Brigham Young University. This summer, an August graduate sent such a letter and described an experience that provided gospel insights for her. A portion of the letter reads

Recently I sat in a physics class and had the Holy Ghost teach me. We were discussing fiber optics and how light travels perfectly through strands of plastic without losing energy. I realized as the lecture proceeded that all things point to Christ. Christ has all power and never “loses energy” as He influences our lives. I sat in awe at the understanding that came to me; not a physical understanding but a spiritual enlightenment filled my soul. I came out of that lecture on a spiritual high.[Letter from Patricia Farr, Aug. 7, 2000]

The young woman’s insight is profound. As an infinite source of all power (Matt. 28:18), the Savior of the world does not lose energy as He assists us in the learning process and in our quest for eternal life (Alma 34:14), even though in mortality “virtue” left His soul (Luke 8:46). Like the story of the woman who touched the hem of His garment, the student’s insight illustrates not only the power of healing but the power of learning when temporal understanding combines with faith to produce a spiritual confirmation.

Recently I became fascinated with the nature of light. One of the interesting characteristics of light is that it can pass through a fiber-optic cable at high rates of speed for thousands of miles without requiring regeneration. As the graduate noted in her letter, there is little loss or attenuation as the light particles pass through the glass core. In contrast, electrical impulses passing along a copper wire lose energy more rapidly and must be boosted every 20 to 40 miles. Also, the carrying capacity of light in a fiber-optic cable is sufficient to transmit millions of TV signals or upward of a billion telephone conversations almost instantaneously. A coaxial cable can transmit only a small fraction of the impulses carried by fiber-optic cables.

Everyone on this planet is aware of the natural light that emanates from our solar star or sun, which provides the heat and light that sustains temporal life on earth. There is another form of light not often studied by physicists: light in the spiritual dimension that emanates from a different Sonour polar or “bright and morning star” (Rev. 22:16). Few are aware of this light, and even fewer are aware that temporal and spiritual light are related, with the second light a more refined version of the first. At BYU we are privileged to know about, access, and benefit from this more refined light. It, too, is the source of lifeeternal life. This light, the Light of Christ, is the source of truth. In speaking to Joseph Smith, the Savior said:

From 1820 to the present, one invention and discovery after another has come to pass. In 1879 the light bulb was patented. Thomas Alva Edison’s invention extended the day as it brought light to the night and to the dark places of the earth. This followed the 1820 revelation that Joseph Smith received in the Sacred Grove and the subsequent revelations that brought spiritual light to the world. The Lord told Joseph that the restoration of the gospel would be but a beginning to the light that He would pour out upon the earthnot only spiritual light but also light that pertains to this temporal world (see D&C 121:2632). The discoveries of the intervening years and the accelerating rate at which light and knowledge are being added today are testimonials to the prophecy.

Brigham Young University is part of the miracle of the Restoration. The goal of the university is to be filled with light and truthboth temporally and spirituallyand to share that light with the rest of the world. We seek to educate the minds and spirits of students in a learning environment that increases faith in God and in the restored gospel. Our dream is the fulfillment of President John Taylor’s prophecy that “Zion will be as far ahead of the outside world in everything pertaining to learning of every kind as we are today in regard to religious matters” (Presidents of the Church,Leonard J. Arrington, ed. [Salt Lake City: Deseret Book, 1986], p. 100).

Fulfilling that destiny is an awesome task. It demands that those of us associated with the university be diligent and obedient in pursuing truth so that we may be conduits of light. We must be worthy to abide the influence of the Holy Spirit.

Reaching our potential as a university also requires the assistance of this institution’s alumni and friends. Building a university to serve the world is an expensive proposition. And although we recently completed a successful capital campaign that provided valuable funding for many priorities, our needs continue. Each year we spend millions of dollars providing scholarships, maintaining programs, and creating new initiatives to help us accomplish our mission. We need your help.

In asking for your continued support, we want you to know two things: First, we greatly appreciate your generosity. Your contributions allow Brigham Young University to be what it is and to become what it will be. Second, we are listening to your concerns about fund-raising and are responding. In that effort, we have just created the BYU Annual Fund, a program designed to streamline our fund-raising efforts.

The Annual Fund will be the centerpiece of fund-raising at BYU. Through this one fund we will support all of the undergraduate programs as well as priorities such as Brigham Young Magazine.In the past many of you have received repeated requests from the magazine and other BYU entities, and some of you have expressed confusion about which request was most important for your charitable contribution. Now I can tell you clearly: If you want to support BYU, give to the BYU Annual Fund.

Through this one fund, you will be able to support all of campus, from your favorite program to general scholarships. The Annual Fund is my top fund-raising priority and the number-one way you can help this university expand and extend its light.

I have heard President James E. Faust, second counselor in the LDS Church’s First Presidency, talk about the last negotiations to obtain the lease on the site for BYU’s Jerusalem Center for Near Eastern Studies. As he and President Howard W. Hunter, then of the Quorum of Twelve, were meeting with the Israeli minister of lands, they gave him a check for the lease, and then he said to them, “Well, I don’t know. Will you really keep your word? Will you not proselyte in our country? Will you not pass out Books of Mormon?” President Hunter was taken back by the questions, but then the man said, “Look, I know you’ll keep your word. I’m not worried about you. What I do want to know, though, is how are you going to remove the light from the eyes of the young people you bring here?”

That light is what we’re about. Gifted students from all over the world gather to BYU. These students are not only academically prepared but are faithfully committed to the gospel. They have testimonies and they want to be involved in the work of the Restoration. When these bright young people come to us, they are filled with hope and light. While they’re here we hope to generate in them even more light. That’s what we’re talking about when we speak of the light of the Y. There is a deep personal conviction within those who graduatemen and women of character who have a sense of what truth is and how to discover and defend it. They have a sense of morality and how to live it. They truly have an inner light that will shine brighter and brighter and draw others to them and with them as they go out and light the world.

Through such students BYU serves more than just the 30,000 who study here each semester. Through those students and through a multitude of outreach programs, BYU serves thousands upon thousands as it helps to build the kingdom of God on Earth. It is my personal belief that this university is an integral part of Zion and will share in her final triumph.

We must accelerate the pace at which we become what we should be. We must give more light to the world. We must have your help.