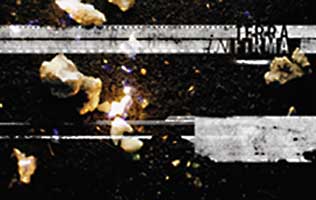 A series of explosions flashed across the tennis-court-sized pit, sending dirt and water high into the air. It seemed like all of Treasure Island heaved a few feet higher above the lapping waters of San Francisco Bay.BYU‘s Kyle M. Rollins rushed to the edge of the chest-deep hole, months of meticulous preparation motivating his anticipation to see if the experiment had worked. Once considered a long shot, the study was now an eminently feasible attempt to simulate an earthquake.Building on a tradition established by Rollins’ BYU colleague T. Leslie Youd, the effort was another in a series of BYU studies of liquefaction, a mysterious geological phenomenon catalyzed by quakes.First identified in 1964, liquefaction occurs in sandy areas, like those along sea coasts or even rivers and lakes, and anywhere else with loose soil and a high water table. When an earthquake strikes, it rattles grains of sand and gravel against each other. This action rearranges the tiny open spaces between them and causes settling like that which occurs when someone shakes a bucket full of rocks. At the same time, the quake pushes ground water upward until the water pressure exceeds the weight of the sand and soil above it. Then the water pushes the grains of sand apart, turning once-stable soil into quicksand and potentially undermining the foundations of buildings, bridges, and utility poles.But thanks in large part to Youd and Rollins, buildings in those areas might tilt but not collapse, bridges over those waterways might bend but not break, and people in those cities might panic but not die. Men of starkly different personalities, the two professors of civil engineering have arrived at their international stature within liquefaction research by approaching the subject from different vantage points and working surprisingly little together.Youd, a gregarious and self-assured storyteller, discovered a form of liquefaction that is particularly deadly and developed a method of predicting its occurrence. Throughout his career, he has traveled the world to study some of the world’s most severe earthquakes, most recently to Turkey in August 1999.Rollins, whose understated manner belies his successes, focuses on man-made structures and how they react when the surrounding soil liquefies. His ingenious methods of developing and testing foundations strong enough to withstand liquefaction involve a mix of high explosives, a rocket-powered sled, and a multiton weight dropping from the sky.“I find problems; Kyle solves them,” says Youd, summing up their complementary roles. Indeed, Rollins might never have found himself peering into that sandy crater on Treasure Island without the work done by Youd during the previous three decades.The Earthquake Chaser
Youd, whose career is twice as long as that of his younger counterpart, began his march to worldwide liquefaction prominence when he was a wet-behind-the-ears officer of the U.S. Geological Survey (USGS) in 1971. Three years out of graduate school, he stepped off a plane onto the tarmac at the Burbank airport and was hustled into a helicopter, its rotors already whirring. Youd and his partner had been dispatched from the USGS offices in Menlo Park, Calif., to observe firsthand the effects of the earthquake that had struck San Fernando only hours earlier. It would be the first of many occasions when Youd would put his desk job on hold to chase an earthquake. 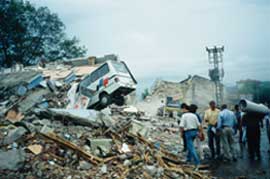 A van trapped in Turkish rubble is a solemn reminder of the thousands of lives taken by buildings that crumbled in the earthquake. Youd’s team examined the ability of structures to withstand a large earthquake. The good news: Structures built to code did well. The bad news: Many buildings were not up to code. 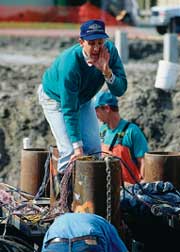 BYU professor Kyle Rollins prepares final details for the first-ever life-sized simulation of liquefaction, a geologic phenomenon that occurs when an earthquake “liquefies” the soil.

But dropping a weight is a little less complicated than setting off enough explosives to create a mini-earthquake. After soliciting sponsorship from the Federal Highway Administration (FHA) and six state Departments of Transportation (DOTs), Rollins and graduate students J. Dusty Lane, A. Tom MacDougall, and Aaron K. McCain threw themselves into months of furious preparation.In February 1999 Rollins found himself pacing the pit on Treasure Island, watching a demolitions expert pack 16 charges of ammonium nitrate 12 feet under the sandy soil. His hair drenched in the steady drizzle, his coat’s hood waving forgotten in the breeze, Rollins nervously checked and rechecked the hundreds of components of his intricate experiment.An array of nine steel pillars, or “piles,” each 42 feet long and plastered with 225 sensors, had been driven into the soil just as they would be at the base of a bridge like the one spanning the San Francisco Bay on the horizon. A 15-foot-long hydraulic press, like a giant tire jack on its side, waited to exert horizontal force on the piles to simulate the swaying of a bridge or building during an earthquake.Six miles of wires from those contraptions snaked their way up the side of the pit and into the camping-trailer-like portable lab. Inside, Rollins silently looked over the shoulders of technicians as they clicked away at laptops, preparing to record signals from buried sensors that would gauge fluctuations in water pressure and the force (or lack thereof) of the soil against the piles.A gaggle of spectators, consisting mainly of UC Berkeley professors and representatives from the sponsoring state DOTs, huddled impatiently under a stand of pine trees across the pit from the portable lab, trying to escape the rain.Finally, after 45 minutes of fixing a downed computer program, several months of project delays, and many nights of nagging doubts, Rollins swallowed hard and gave the go-ahead to the demolition expert in the black hard hat.Before spectators could process the sudden realization that the technician who controlled the explosion was wearing a hard hat and they weren’t, he yelled, “3, 2, 1 . . . fire in the hole!” and let a representative from the FHA turn the crank.When the demolition man gave the all clear after the blast, Rollins and the other researchers congregated at the edge of the pit, cameras and camcorders in hand. The computers would reveal later if the water pressure had changed enough to create liquefaction, but there was a more obvious way to tell if the experiment was a success.After a few minutes, Rollins got what he’d been waiting for. Miniature geysers appeared, building cone-shaped mounds of sand around them. Called “sand boils,” the approximately 4-foot-high minivolcanoes are chronic symptoms of liquefaction.Only when the sand boils appeared did a smile ease its way onto Rollins’ face, and he finally allowed himself to revel in creating the first-ever life-sized simulation of liquefaction. With the hydraulic press pushing back and forth on the piles behind him and the sensors recording how much strength the soil had lost, Rollins exclaimed, “It’s a beautiful test—look at that sand boil!”Since then, Rollins and his students have been analyzing their data in order to pass along the results to working engineers. “Until now, engineers have had to rely on 30-inch-long models and educated guesses when trying to build earthquake-safe structures in liquefiable soil,” says Rollins, who teamed with UC San Diego’s Scott Ashford on the project. “This test provided the first hard data in the world for designers to base their plans on.” 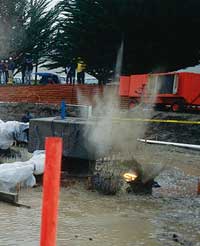 Sending water into the air and shock waves through the ground, 16 explosive charges simulate an earthquake on San Francisco Bay’s Treasure Island. The February 1999 test, conducted by Rollins, yielded the first hard data about how structures behave in liquefiable soil during an earthquake.

So far Rollins has found that liquefied ground offers extremely little resistance to foundations when they move a few inches but more strength than engineers have believed after structures move a few feet. He and Ashford have presented their preliminary findings at seven different conferences, including the 12th World Conference on Earthquake Engineering in Auckland, New Zealand, in February 2000. Their experiment has been met with excitement in the engineering field.“Currently there is very little design information regarding the lateral response of pile groups in liquefied soils based on full scale testing,” says Jan Six, an engineer with the Oregon Department of Transportation, which co-sponsored the Treasure Island tests. “Design parameters are based on very limited data and largely on engineering judgment. This research should help in refining those judgments and in developing better design parameters.”The experiment has also yielded other positive results. In an effort to mitigate the effects of liquefaction, Rollins pounded plastic drain hoses about 6 inches in diameter into the ground prior to the blasts. When the “earthquake” occurred, the tubes channeled the surging water into the air, preserving much of the integrity of the soil. California officials say they are going to include such hoses in the ramp to the new San Francisco Bay Bridge they are designing.Even while analyzing and reporting the results from Treasure Island, Rollins tried another unique method of experimentation. In December, he ordered a visit by the Statnamic, a rocket-powered 39-ton sled the size of a sport utility vehicle. Engineers use it to simulate the immense and sudden force of an earthquake. After sinking another configuration of nine steel piles into the ground near Salt Lake City’s Interstate 15, Rollins aimed the sled at the mock foundation and lit the carbon pellets that fuel it.In a flash of orange flame and white smoke, the sled slammed into the piles, delivering 800,000 pounds of force in 0.2 seconds—power comparable to the monster strength of a real earthquake. Sensors recorded the reaction of the foundation, giving engineers vital information about how strong their designs must be to survive a seismic event.Rollins combined the two testing techniques this summer in Charleston, South Carolina, where he has been asked to help design and test a new bridge. Engineers there want his guidance in their effort to simulate liquefaction with explosives, a la Treasure Island, and then use the Statnamic to apply horizontal force while the ground liquefies around the foundations they might use.“I’ve tried to do work that can be applied,” Rollins says. “I hope that working engineers will be able to take my research and apply it in a way that will have a benefit to people.”Movers and Shakers
From Les Youd’s discovery of lateral spread to Kyle Rollins’ design parameters for safe foundations, the cumulative impact of the pair of BYU professors is being felt throughout the earthquake engineering field.Youd, 62, has just finished his second stint as chair of BYU‘s Department of Civil and Environmental Engineering, and he has already served on the board of directors of the EERI, been chair of the Utah Seismic Safety Commission, and won numerous research and teaching awards. He is returning to full-time teaching and research.Rollins, only 42, won the Huber Prize for young researchers in 1999 from the American Society of Civil Engineers, and he has a new earthquake engineering term of his own to his credit. The acronym TILT is beginning to turn up in the research literature—it stands for Treasure Island Liquefaction Test. The tradition of excellence in liquefaction research at BYU that began with Youd will likely carry on.“Les is one of the key figures in geotechnical engineering, and Kyle, with his work on Treasure Island, is beginning to make his presence felt. They complement each other well,” says Jim Mitchell, who retired recently after 42 years as a professor of civil engineering at UC Berkeley and Virginia Tech. “They’re a real credit to their profession and their institution.”