Subduing the Spirit of Contention

Finding constructive ways to deal with anger can strengthen relationships.

Anger experts say that anger develops more often in the family–with spouses and children–than in any other relationship. This is evidence of Satan’s efforts to destroy families, in part, by stirring up anger between family members. The Savior explained that Satan is the “father of contention, and he stirreth up the hearts of men to contend with anger, one with another” (3 Ne. 11:29).

The prophet Alma taught that we are to bridle all our passions (including anger) that we may “be filled with love” (Alma 38:12). Unbridled anger is soundly condemned of the Lord. He has said, “He that hath the spirit of contention is not of me, but is of the devil” (3 Ne. 11:29). Thus, this kind of anger is actually a yielding to Satan’s influence by surrendering our self-control. Unless we learn to govern anger, we are at its mercy and must deal with unwanted consequences. By understanding anger and how to bridle it, we can keep it from leading us to destructive ends.

According to anger scholar Charles Spielberger, anger is typically expressed in three ways, two of them destructive. First, it may be directed outward in aggressive ways. When angry, you might feel like screaming, punching someone, smashing something, or throwing a chair or book across the room. Instead of solving the problem, these destructive expressions of anger usually make the problem worse. A recent study showed that, contrary to popular belief, “venting anger” through physical aggression, such as by punching a bag or a pillow, actually increased aggressive behavior.

This expression of anger is divinely deplored. Elder Lynn G. Robbins of the Seventy says this anger is “the thought-sin that leads to hostile feelings or behavior. It is the detonator of road rage on the freeway, flare-ups in the sports arena, and domestic violence in homes” (“Agency and Anger,” Ensign [May 1998], pp. 80–81). It is this form of anger that “should be done away” (3 Ne. 11:30).

A second expression of anger is directed inward, through holding in or suppressing angry feelings. This mode of expression can also be destructive: if anger is not allowed some form of constructive expression, it can increase the risks of high blood pressure, depression, suicide, gastrointestinal problems, and drug or alcohol use. Unexpressed anger can also contribute to other problems, such as passive-aggressive behavior, hostility and cynicism toward others, and increased use of put-downs and criticism.

A third mode of anger expression is the control of anger. Pop psychology once promoted the philosophy of “leting it all hang out.” During its heyday, this approach led many clinicians and others to recommend that people freely communicate their anger. But research has shown that, far from solving problems, unbridled expression of anger makes matters worse. It is wise to control or manage the expression of anger in constructive ways.

Controlling anger doesn’t mean ignoring the emotion. Instead, it involves first calming oneself so the emotion can be used to achieve constructive ends, such as solving problems and restoring emotional connections with others.

Realize that Anger Is a Choice 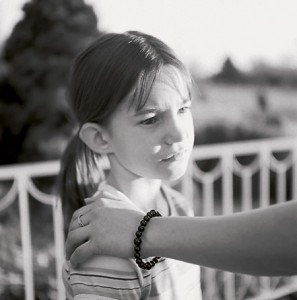 By controlling their anger, family members can work through conflicts in loving, respectful ways. Photo by Bradley Slade.

Anger is a learned response to a trigger in our environment. While we may have a tendency to become angry, it is not wise or correct to give in and simply say, “That’s just the way I am, and there’s nothing I can do about it.” We are ultimately in charge of which behaviors we choose in response to the emotions we feel. We may often say that someone “made” us angry, but we are never forced against our will to lose our temper. Between every provoking situation and outcome lies the freedom to select our actions. Habit may make our responses seem almost involuntary, but the moment of choice still exists.

A first step to overcoming feelings of anger in the home is acknowledging that we have the power, through our agency, to respond to family challenges with either love and understanding or anger and frustration. Elder Robbins continues, “Becoming angry is a conscious choice, a decision; therefore, we can make the choice not to become angry. We choose!” (p. 80).

While no one can force us to become angry or express anger in destructive ways, we may be more susceptible to giving in to anger because of certain triggers. It is wise to learn what your anger triggers are and write them down. Your anger might be triggered when a spouse ignores the good things you do, a teenager puts you down, or a child is messy, uncooperative, or disobedient.

Once you have made a list of your anger triggers, spend some time thinking about what you might do instead of reacting angrily the next time the trigger gets pulled, then write down your strategies. For example, if you are angered when your teen won’t clean his room, create a strategy in advance for what you will do and say the next time this situation arises.

How do you react when an anger trigger is pulled? Do you feel hot or flushed? Does your heart pound? Do you breathe more rapidly? Do your neck muscles tense up? Notice the thoughts you have and what you do or want to do when you feel anger. Examples of angry thoughts include feelings of unfairness or that a person is “out to get me.” You may also feel a desire to order, threaten, hit or slap, scream, or punish severely. Also notice signs of suppressed anger, such as sarcasm, feelings of frustration, or a desire to get even.

For those of us who have been taught to deny our feelings of anger or to act as if they don’t matter, this kind of introspection can be uncomfortable. But to combat anger and build peace in the home, it is important to be very honest with ourselves about the nature of the problem.

Before the issue that triggered the anger can be resolved, you must first reduce the intensity of the angry feeling by calming yourself. Discover what methods help you calm down when you become angry. Such things might include calling a friend or relative, listening to music, praying and meditating, exercising, writing down feelings, sleeping, taking a warm bath, breathing deeply, counting to 10, or simply thinking about a peaceful, beautiful place.

There are many reasons why someone may do something that triggers our anger. Putting ourselves in another’s shoes can help us respond in rational, constructive ways. A spouse may be tired or overly stressed, or a teen may not have meant a seemingly critical remark to come out as it did. Anger is often based on such misunderstandings and misinterpretations.

Similarly, parents should learn about children’s behavior at different stages of their development and recognize that certain undesired behaviors may be normal for a child at a given age and maturity level. Such knowledge can help a parent respond lovingly when a child pushes an anger trigger.

Setting ground rules for the expression of anger in the home will help you manage it. For example, a family might agree in advance to call a time-out when anger and conflict are escalating over an issue and to hold off discussing the issue until everyone is calm and can listen to one another better. Or a family might specify a certain amount of waiting time–10 minutes or even 24 hours–before they talk about a stressful issue. Using ground rules can help you deal with difficulties that trigger anger with less bickering and strife.

Unless we learn to govern anger, we are at its mercy and must deal with unwanted consequences.

Practice expressing concerns calmly and with an attitude of respect, without attacking or blaming the other person. Explain why you feel angry. Use statements that follow an “I-feeling-when-because” format, such as “I feel frustrated when you come home after curfew because that is against our agreement.” Follow this up with the change you believe to be necessary to solve the problem. For example, “I want you to follow through on what we agreed.”

Even when expressing anger, we can communicate love and respect. With a gentle touch on a child’s shoulder and a calm voice, you can communicate that you still care about the child and value the relationship. By expressing your feelings calmly, you are more likely to be able to explore with the other person the sources of the conflict and how such a situation may be prevented in the future. When anger is recognized and approached calmly, respectfully, and with the intention of strengthening the relationship and not hurting it, it can actually encourage growth and intimacy.

Pick one of your anger triggers and come up with a plan for dealing with it. Identify what triggers your anger, how you tend to react physically and mentally, and steps you can follow to calm yourself and respond in a loving, appropriate way. Don’t try to deal with all your triggers at once. Just start with one.

Some of us may have become so accustomed to destructive expressions of anger that it seems nearly impossible to change them by ourselves. If this is so with you, get help from a trusted and trained professional or a church leader who can help you deal with your anger.

Latter-day Saints believe in a Father in Heaven who has a body, parts, and passions and who has learned to govern them perfectly. He knows the mortal challenges we face in controlling ours. We can plead to the Father for divine power in controlling our anger. The Lord has instructed us to pray “with all the energy of heart, that [we] may be filled with . . . love” (Moro. 7:48). We can pray about specific situations in which we find ourselves most vulnerable. By feasting upon the Lord’s word, earnestly praying, and doing our all to control our emotions, we can surrender to the authority of Jesus Christ instead of giving in to our anger impulses.

Stephen F. Duncan is a professor in the School of Family Life. This article is adapted from an article on the foreverfamilies.net Web site, which addresses a wide range of family topics from scholarly and gospel perspectives.

Caring for the Caregiver

To successfully watch over another, caregivers must also watch out for themselves.