By Noelle Barker in the Summer 1997 Issue

For most BYU students, weekly schedules consist of writing papers, taking tests, attending lectures, working part-time jobs, and, where time permits, enjoying some sort of a social life. For a group of about 25 students, though, each semester’s schedule also includes going to prison.

For the last 10 years, BYU students have been regular visitors at various Utah Department of Corrections facilities, teaching inmates how to strengthen and preserve their family ties as well as build lifestyle management skills while in prison. The inmate classes, which originally began as a voluntary club activity, expanded to courses for credit for family science majors about Þve years ago. 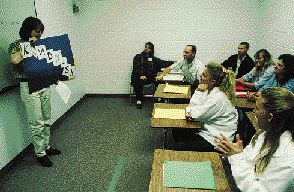 Shirley Klein, an associate professor of family sciences, has been involved with the program from its inception when she was the advisor for the club that began teaching the classes. She continues to be involved with the program as the course instructor. Part of her responsibilities include recruiting inmates, training BYU students to teach the courses, developing course curriculum, and setting up courses at the correctional facilities.

“It’s very rewarding,” Klein says. “I call it a win-win-win-win. The students win by having the opportunity to teach in a difficult setting to a disadvantaged population; the inmates win because they have a really good, quality class taught by a group of students who are extremely capable and enthusiastic; the prison wins because they get free, good programming; and I win because it’s an opportunity to do some research to learn more about inmate families and how to structure interventions that can be more effective.”

Many of the inmates involved in the program grew up in disruptive homes characterized by low socio-economic backgrounds, parental criminality, or the absence of a parent due to divorce or desertion. Because of these and other environmental factors, many inmates have limited lifestyle-management and family skills. According to Klein, many inmates do not consider their behaviors as belonging to themselves and do not take responsibility for what they do. BYU students address these issues in the courses and hope that by applying these skills, inmates will be better prepared to face various issues once released from jail.

“Life management skills help inmates think about problems they might face upon re-entering their families–problems with relationships and problems with everyday hassles of living like food, clothing, transportation, and housing,” Klein says. “We encourage inmates to think through what problems they may face as well as some possible solutions.”

Inmates improve their lifestyle management skills by learning how to budget and plan for housing and transportation outside of prison. In addition, they are taught how to improve their relationships with family members and loved ones. “When the inmate goes back to the family, a lot of research shows that a strong family tie will help them be successful on the outside,” Klein says.

Currently there are few programs available for former inmates who seek assistance in strengthening family ties, and Klein argues that correctional facilities can provide effective learning opportunities for inmates to learn skills they can use after their incarceration.

“Family education could be done relatively inexpensively and be an ongoing part of programming at the prisons,” Klein says. “Our effort is to give BYU students an opportunity to practice those skills of teaching about families in a setting where there’s a high need.”

The majority of students who teach the inmate courses are family science majors who seek experience as family life educators. For eight weeks, teams of six to eight students visit a men’s or women’s correctional facility in the state to teach classes once a week. It’s not just the inmates who learn from the classes, however; the teachers also learn valuable lessons.

“I feel that I can learn things from them instead of just teaching them,” says Geaninna Bartholomew, a native of Costa Rica and a graduate student in family life education. “These classes can not only help the inmates, but they can help you appreciate what you have.”

Initially, many BYU students go to the prisons with some fears, accompanied by stereotypes of what the prison and inmates will be like. Those stereotypes quickly disappear, though, once students realize that the inmates are just people who have made some bad decisions in their lives, says Klein. “Students always come away appreciating an inmate more as a person, and they feel good about the contribution they have made.”

The inmate courses have also proven to be a learning experience for Klein and other researchers who have conducted follow-up research to measure the effectiveness of the classes. Klein and colleagues interviewed inmates at the beginning and end of courses and recently published their results in the International Journal of Offender Therapy and Comparative Criminology. In the interviews, the researchers evaluated how beneÞcial the classes were, what problems the inmates faced upon release from jail, how inmates responded to those problems, and how many committed new crimes and returned to prison.

“We learned that inmates were able to identify more problems and more possible solutions at the end of the course than they had before. Whether or not they acted on that is another question,” Klein says.

Some former inmates who participated in the lifestyle classes have since returned to jail, but others have successfully reintegrated themselves into society. One former female inmate indicated that the course helped her get her life back together.

“I am more capable of coming back out and dealing with life, one step at a time, one day at a time, and putting everything in focus,” she said.

Klein credits the students involved with the program for much of its success.

“The BYU students are really fabulous young people who are willing to give and to serve and are very generous with their talents,” she says.

As coaches and models, parents can help children learn about others’ feelings.