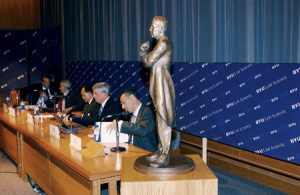 A statue of Rex E. Lee former BYU president and solicitor general, is prominently displayed at an historic conference named for him.

NO matter how many lawyers it takes to change a light bulb, BYU had it covered at the first Rex E. Lee Conference on the Office of the Solicitor General of the United States. The seminar, hosted by the J. Reuben Clark Law School Sept. 12­13, was what President Merrill J. Bateman termed “an historic occasion and an unprecedented gathering of some of the finest lawyers in the history of the United States.” The conference involved discussion panels composed of 21 lawyers who have served in the office of the solicitor general, including the five most recent past solicitor generals, Charles Fried, Kenneth W. Starr, Drew S. Days III, Walter E. Dellinger, and Seth P. Waxman. Each panel discussed the role of the solicitor general—the attorney who represents the government in the Supreme Court—and the cases the panel members encountered while working in the office.Also featured was a keynote address by Theodore B. Olson, current U.S. solicitor general. He spoke about the contributions former BYU president Rex E. Lee made while serving as solicitor general from 1981 to 1985. Other panelists who worked with President Lee also expressed their personal and professional admiration for him. “He was just the nicest guy you would ever want to meet—a truly decent human being,” says Andrew L. Frey, deputy solicitor general from 1973 to 1986. “It was a pleasure and an honor to serve with him.” In all, the lawyers expressed respect for the solicitor general’s responsibility as government spokesman. Each seemed grateful for his opportunity to work with, as Thomas B. Griffith, general counsel ofBYU, put it, “the most interesting issues in terms of interplay between law and policy that exist.”

The Necessity of Compromise

Mutual respect and negotiation gave birth to the Constitution—and will preserve it today.

Once a simple enrichment activity for Old Testament students, the BYU Passover celebration is now attended by thousands.