Smartcard Has Potential to Save Lives 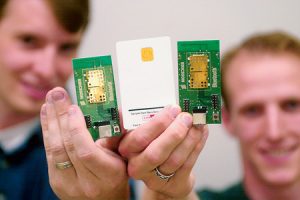 THE Poket Doktor, invented by Peter B. Jones, ’02; Eric S. Hall, ’02; David K. Vawdrey, ’02; and Matthew S. Young, ’02, has brought international attention to the four electrical and computer engineering students from BYU. A prototype of a microchip-embedded credit card, the Poket Doktor uses Bluetooth wireless technology to relay medical information to paramedics at the scene of an accident when the victim is unable to communicate.The project, which began as an assignment for their senior engineering course, eventually earned the students a third-place finish in the world finals of the Institute of Electrical and Electronics Engineers’ (IEEE) Computer Society International Design Competition (CSIDC).Team members split the $6,000 prize and secured an additional $6,000 scholarship fund for BYU‘s Electrical and Computer Engineering Department. Winners were chosen based on project creativity, usability, and marketability. The event was sponsored by companies, such as Microsoft, AMD, Hewlett-Packard, Motorola, and Intel, that are involved in the development of the emerging Bluetooth technology.“It was exciting to hear our team’s name called,” says Jones, 23, from Providence, Utah. “I think the quality of our presentation and the fact our project could someday have an impact on people helped us a lot in placing where we did.”The project resulted from a senior engineering class taught by Michael J. Wirthlin, ’92, assistant professor of electrical and computer engineering. Wirthlin said he wanted to give students a chance to be involved in something cutting edge while they applied classroom instruction. Their assignment was to design a special-purpose computer device that would benefit society using the much-anticipated Bluetooth technology, which uses a radio link to transfer information wirelessly between digital appliances within 60 feet of each other. “It’s good for them to get real-world experience so that they can get a taste for the industry,” Wirthlin says.At the end of the semester, Wirthlin held a class contest where the teams presented their ideas to two industry professionals and a computer science professor. Competing against a car diagnostic system and an interactive shopping list system, the Poket Doktor team won the opportunity to represent the university in the CSIDC competition.According to Jones, learning how to program the Poket Doktor was the group’s biggest challenge. “None of us had ever used the programming language required to create the project before. It was a big learning curve. The first couple of weeks were kind of crazy just trying to learn how to use it,” Jones says.Vawdrey and Young say all the long hours spent working on the project were worth it. “When we graduate we can say we’ve actually done things that a lot of students at other universities don’t get the opportunity to do.”

BYU Animation students are in the midst of a new film. They discuss production, directing, and more.

Thomas is seeking to uncover clues in a mystery that began about 1343 when a man, the son of a London vintner, was born.