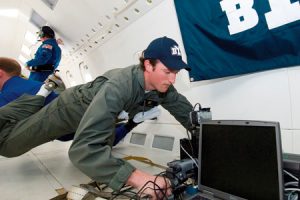 Four BYU students dressed in flight suits strap a laser to the floor of a C-9 jumbo jet parked in a hanger at NASA’s Ellington Field in Houston, Texas. Having completed a week of training at the Johnson Space Center, they are ready to conduct research in zero gravity in an airplane called the “Vomit Comet.”

“It’s amazing that you can put what you actually learn in the classroom to use and have it put out data and results that you can actually do something with,” said Krystle Farnsworth (’08), a mechanical engineering student.

NASA’s Reduced Gravity Flight Program invited Farnsworth and three other BYU undergraduate students to test an experiment they designed to discover the role of gravity in the levitation of microscopic particles in a laser beam. Why some particles stay suspended in the laser remains a scientific mystery. One possible explanation is that the heating of the particles induces convection currents in the surrounding gas, which produces buoyant forces.

To solve the mystery, the students, working under the direction of associate physics professor Justin B. Peatross (BS ’88), wanted to introduce particles into the laser in a gravity-free environment, where convection currents do not exist.

“This team did a lot to prepare for this. They designed the experiment; they machined the parts and put them together. They had to fill out large reports for NASA to prove that the experiment could be done safely. They’ve shown a lot of initiative,” Peatross said.

After giving the anxious passengers a strong dose of motion sickness medication, two NASA pilots sped down the runway, lifting what they call the “Weightless Wonder” into the warm Texas air. The pilot flew to an altitude of 25,000 feet above the Gulf of Mexico and began a series of parabolas—steep climbs followed by free falls, each creating 30-second increments of weightlessness. “There is nothing to describe it. It is kind of like doing it in a pool but there is no resistance, so you just kind of keep going,” said Farnsworth as she floated from the floor to ceiling upside down. “It’s so different than anything else—you can’t imagine it.” 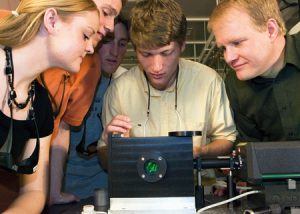 Farnsworth and fellow student Matthew D. Turner (’07) held tight to straps on the floor of the plane and introduced graphite particles into the laser as their legs floated high above them. For one hour, and 32 parabolas, the students flew around in the cabin but the particles in the bright green laser beam remained stationary, showing that gravity is not important for particle levitation in the laser.

Pleased with the results of their research and a bit worn from the weightless roller coaster ride, the students sat back in their seats as the jet returned to Ellington Field. “We’ve ruled out the effect of the air currents rising,” said Nathan D. Powers (’06), a physics major from Texas and captain of the student team. “Now we can go on to look at the other options as to why the particles are being trapped in the laser beam.”

This NASA-sponsored “selfie space cam” cheaply and safely monitors the condition of spacecraft.

The Harold B. Lee Library is about 50 percent larger than it was before.