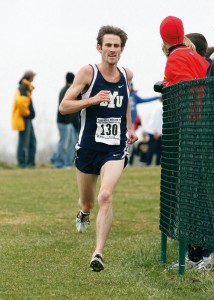 Even in the crush of more than 250 bodies running the men’s race at the NCAA Cross Country Championships, it wasn’t hard to spot BYU‘s Josh Rohatinsky (’07). He was a frontrunner from start to finish.Rohatinsky, who finished sixth overall with a time of 29:40, says he was surprised to fare so well and credits his success to a quick start.By mile four of the 6.2-mile race, the stream of runners had thinned out near the front, but Rohatinsky was still there—and there in style, stringing sub-5-minute miles together with seeming ease.“I have the bad habit of doing well in the middle of the season and then dropping off at the end,” he said after the race, “so to do as well as I did today was just the end to a good season.”With his performance at the national meet in November 2005, Rohatinsky earned All-American honors for a second year in a row, adding to a list of accolades that includes Academic All-MWC and MWCChampion.Asked about his prospects for next year’s nationals, the BYU junior defaults to modesty.“There are always juniors and sophomores who are going to step it up next season,” Rohatinsky says. “But I think I have a shot at it, and that’s all that matters.”—Ryan B. McIlvain (’06)

How It All Came Crashing Down

BYU economics professors explain how the US got into a recession and how we can learn from it.