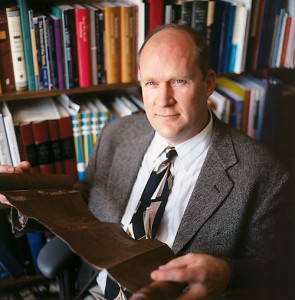 Donald Parry’s book, Discoveries in the Judean Desert, is volume 17 of the official publication of the Dead Sea Scrolls. It discusses the books of Samuel–some of th eoldest scrolls discovered in Qumran.

DONALD W. Parry, ’85, associate professor of Hebrew language and literature, has a new book being published. It’s not his first and probably won’t be his last. In fact, the number of Parry’s book-length publications about the Dead Sea Scrolls will soon reach double digits.But amid all his publishing, no work has more importance to Parry than his new book, which is volume 17 of the official publication of the Dead Sea Scrolls,Discoveries in the Judean Desert. “Archaeologists have called the scrolls the greatest discovery of the twentieth century, and it’s a great privilege to be a part of this monumental work,” remarks Parry, a member of the official team of translators for the scrolls.The scrolls that contain the books of Samuel, the subject of Parry’s new book, are some of the most ancient of the more than 800 discovered in the caves of Qumran near the Dead Sea. Including Hebrew transcriptions of the scrolls as well as text reconstruction, translation, and commentary, Parry’s book will be the authoritative text on the Samuel scrolls. “The scrolls teach us much about the formation of the Bible and how the scribal process of transmitting the text often changed it, affecting the version we have today,” says Parry. “I have found between 300 and 400 discrepancies in the book of Samuel alone, including a whole missing verse. Sometimes it’s only a word or two that’s changed, but it alters the entire meaning of the verse or chapter.”“This is my full-time work,” Parry concludes. “There are several other faculty members on campus who also contribute. The work BYU and its faculty have done on the Dead Sea Scrolls has put Provo and the university on the map of the world of ancient studies.”