In writing about a 1955 murder, a BYU author makes the dangers of racism and injustice vivid for young readers. 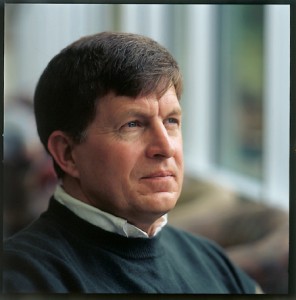 When Chris Crowe Happened upon the tragic story of a 1955 murder, he felt driven to make it more broadly known. That drive resulted in an awkward winning historical novel. Photo by Bradley Slade.

“I can’t believe it, Hiram,” she whispered. “They killed that boy. When I think about how he must have felt, what he must’ve been thinking those last hours . . . how afraid he woulda been.” She shivered. “Why do men do things like that? Why do they have to hurt people?”

So says Naomi to Hiram in Mississippi Trial, 1955, Chris Crowe’s young adult coming-of-age novel set in a tiny Mississippi town. White teenager Hiram is visiting his grandfather, but a bucolic summer interlude turns into a nightmare when his black friend, based on the real-life Emmett Till, is brutally murdered for whistling at a white woman. The novel explores frankly—and often disturbingly—such themes as racism, injustice, and the limits of kinship.

As a former high school football coach and author of several books for youth, English professor Christopher E. Crowe, ’76, might seem like an unusual author to tackle such serious themes. But the multidimensional writer found the Till story irresistible. He encountered it in 1998 while working on a book about young adult author Mildred D. Taylor, who as a child had been deeply moved by the Till murder. Because the experience influenced the subject of his book, Crowe decided to look a little deeper. He came across a 1955 article in Jet magazine about Emmett and was struck by two things: first, a shocking photo of the disfigured boy in his casket, and second, an awareness that the story was standard knowledge for black Americans but not for white Americans—a situation he hoped to change.

“When I saw the photo of Emmett Till in his coffin and then when I read a little more of the historical context, I just couldn’t believe that an educated person could have gone through life not knowing about it,” says Crowe.

Two white men were arrested for the murder but were acquitted at trial despite overwhelming evidence against them. The outrage that followed became an important catalyst for the civil rights movement. Crowe launched something of a one-man mission to educate young readers across America about the case. His research brought him more shocks, including a 1956 Look magazine article in which the two murderers openly admitted their guilt—fully aware of their immunity because of the double jeopardy law.

Crowe’s manuscript for the novel caught the eye of editor Phyllis Fogelman, who had her own imprint at Penguin Putnam. It was published in 2002. Crowe then came to believe a nonfiction book was important as well, and Fogelman agreed, resulting in the 2003 release Getting Away with Murder: The True Story of the Emmett Till Case. It recalls in excruciating detail through text and photos—including the image of Emmett in his casket that had so disturbed Crowe—the story of what happened to the boy and the men who killed him.

The decision to choose such serious subject matter for a young audience might seem difficult, but it was not for Crowe or his publisher. His current editor, Rebecca Waugh, who succeeded Fogelman, says: “When I first talk about this novel to people who don’t work in children’s publishing and who aren’t teachers, I tend to get a raised eyebrow. They wonder how such a horrifying case could become the subject of a novel or a work of nonfiction for ‘children.’ But then Emmett Till was a teenager himself, and that’s what I think makes both books especially relevant and compelling for young adults. 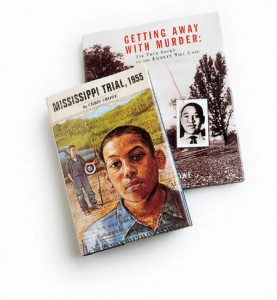 Crowe complemented his award-winning historical novel, Mississippi Trial, 1955, with a nonfiction book detailing the lessons of a tragedy for a new generation. Photo by Bradley Slade.

“Response to the two books has been universally positive. The list of honors for Mississippi Trial, 1955 is long, including the International Reading Association Children’s Book Award in the Young Adult Fiction category, designation as a Best Book for Young Adults by the American Library Association, and the 2002 Association of Mormon Letters Novel Award. Several high schools now require the novel in English classes, including the Chicago high school where Emmett Till’s mother once attended.

Waugh believes the books have been so well received in part because of Crowe’s skill at reaching a teenage audience: “I think he understands and remembers what it was like to be a teenager. I also think he knows how to balance moments of hard realism, especially in this story, with moments of humor.

“Young adult author Carol Lynch Williams, who has published 18 novels, read an early draft of Mississippi Trial, 1955 and cheered Crowe on as he went through the painful rewriting process. “He’s put his guts on the page, and you read it and it tears you up,” says Williams. “It’s a hard story to read, and it was a hard, hard story to write.

“Writing for teenagers can be particularly challenging, says Williams, because they have short attention spans, acutely sensitive radars for dishonest writing, and zero tolerance for preaching. “Chris is a completely honest writer. He tells the ugly story. He puts the emotion on the page for the reader.

“The road to the writing life for Crowe started back in high school in Tempe, Ariz. Crowe loved football, literature, and McClintock High. His dream job, he decided, would be teaching English and coaching football at McClintock. So he earned a B.A. in English at BYU in 1976 and within a year was back at his old high school with the idyllic job he had imagined. After a few years, though, he discovered he could be a great teacher or a great coach, but not both. English won the tug-of-war. 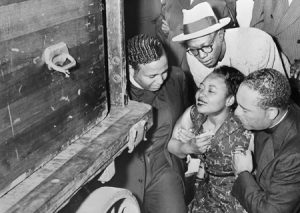 Mamie Till reacts to the return of the body of her son, Emmett, to Chicago. His brutal murder brought world-wide attention and was a catalyst for the civil rights movement. Photo © Bettmann/ Corbis.

He eventually earned an EdD in English education at Arizona State and joined the BYU faculty in 1993. Since then he’s published nearly a dozen books, both creative and scholarly, more than 100 reviews of young adult literature, and 70 articles or columns in professional journals. “On my best days writing is the first thing I do,” Crowe says.

Crowe’s next project is to tackle rewriting the first novel he ever wrote back in 1988. Called Life Without Lips, it’s a comic teen novel—a refreshing shift of gears from the Till story. In January 2004 Scarecrow Press will publish More Than a Game: Sports Literature for Young Adults, a huge undertaking that tells the history of books for teenagers with a sports angle and includes an appendix of 3,000 titles. “That’s the jock in me,” says Crowe. “I like sports and I like literature. These books aren’t just game sequences—they’re really novels about characters who happen to be athletes.

“Though he is moving forward with new projects, the Till story continues to haunt Crowe, and he relishes any opportunity that comes up to help others grasp its important lessons. “The novel is what I wanted it to be—it brings up Emmett Till’s story and gives young people a chance to think about it and talk about it.”

M. Sue Bergin is an adjunct faculty member in the BYU Honors Program and a writer and editor in Orem, Utah.

Feedback: Send comments on this article to worksandprogress@byu.edu.