Restoring the Face of History 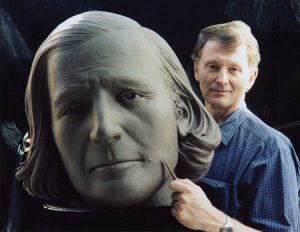 A surgeon-artist honors the Mormon Battalion with a monumental project.

If a pair of monumental sculptures that commemorate the 1846 Mormon Battalion look exceptionally lifelike, it might be because they were crafted by a physician who sculpts to make himself a better facial plastic surgeon.

Steven L. Neal (BA ’77) of Pendleton, Ore., spent five years and donated thousands of hours of service to create two works that feature 11 larger-than-life figures. Visitors at the This Is the Place Heritage Park in Salt Lake City can see them this fall outside the Mormon Battalion Visitors’ Center.

The first sculpture, Duty Calls, shows Brigham Young touching the shoulder of a young husband, whose unhappy wife looks toward President Young as she holds a baby. Another child grasps the father’s leg. The companion work, Duty Triumphs, features six battalion members. They include Melissa Coray, who followed her husband, William, on the trek. Her third great-granddaughter, Melissa Ballard, served as Neal’s model. Duty Calls depicts the trek’s starting point at Council Bluffs, Iowa, and Duty Triumphs its conclusion at San Diego, Calif.

“The twice-life-size sculptures include the largest statue of Brigham Young ever realized,” Neal says. It was also one of his most challenging figures to create. When Neal studied sculpting in Italy, he was taught that when you sculpt a face, you start with the profile. But finding an image of a profile for Brigham Young was difficult, and Neal had to use a photograph of the leader taken just three years before his death in 1877. In the nearly 30 years since the 45-year-old Brigham Young had gathered troops for the march, the prophet had lost teeth, which had made his nose droop and upper lip recede.

Using plastic surgery principles, Neal rejuvenated the profile. “I raised the tip of the nose, offering support and increasing the projection of the upper jawbone to produce more height in the lower third of the face,” he explains. The new profile likely would have more closely reflected Brigham Young’s appearance when he recruited his troops. Neal also removed the prophet’s beard, which he didn’t wear until late in his life.

The artist-surgeon had not intended to do monumental works but accepted the assignment after being contacted by the Mormon Battalion Historical Society. Benefactor Larry H. Miller funded the project. As Neal’s talent has expanded, he now envisions another park with figures from the Book of Mormon.

Neal says he is pleased that he has not had to choose between two passions. His interest in art is lifelong, and one of his most satisfying early endeavors is an intricate canvas that represents Lehi’s dream. The work received the top prize in the first art competition of the Museum of Church History and Art in Salt Lake City and has hung there since 1987.

Because of his interest in art, he opted to study plastic surgery, believing his artistic skills could benefit him as a surgeon. They have, and he uses his techniques to help doctors who find the aesthetics of plastic surgery challenging. Every year he provides instruction—including sculpting lessons—at the Art of Rhinoplasty Course in San Francisco.

“Even in the classroom, I can tell which doctors will become mediocre plastic surgeons,” he explains. “Medical school candidates have extensive left-brain abilities that get them into medical school, but they may lack the right-brain skills to visualize the aesthetics. Perhaps we should do our training differently. Maybe if we went to sculpture school and chose people who also had left-brain skills, we would have a better medical team. As part of my teaching, I mold faces with a nose that is kind of weird and awkward. I have the doctors start carving on them, and we analyze their efforts collectively. When doctors achieve a good nose, they are so proud.”

Neal is recognized for his surgical abilities but says the specific facial changes his patients might seek can be challenging because of biological limitations. “I can achieve ideal results in clay, but flesh and bones have minds of their own,” he says. “Nobody makes a face like God does.”