By Lisa Ann Jackson Thomson in the Spring 1999 Issue

I remember my first big interview. I was a student intern at Brigham Young Magazine, and I was assigned to write a news article about the stained-glass windows in the recently built Orem City Children’s Library. I was nervous. My stomach turned and turned at the thought of ruining the interview with my inexperience. 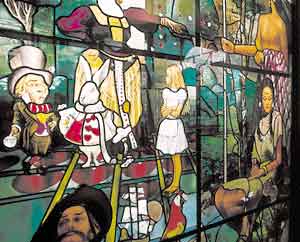 I met Ralph Barksdale, then on BYU’s design faculty, and stained-glass artisans Tom and Gayle Holdman inside the library in front of the windows. Feeling amateur but looking official–with tape recorder and photographer in tow–I spent the next two hours hearing an incredible story of how the windows grew from Tom’s experience in Czechoslovakia and from Ralph’s imagination. Tom and Ralph told me how they worked with stained glass in a way that had not been done for decades. They showed me stubborn panes of glass that broke two, three, four times. They told me about the literal blood, sweat, and tears they shed stumbling through the process for a year and a half until they had created windows many have called awe-inspiring.

I returned from the interview stunned by the story. I sat in my editor’s office almost in tears, begging for more room in the magazine. One page wasn’t enough. The story was too big, too beautiful, too amazing.

I have since discovered that all of us want more room in the magazine. We all hear stories too wonderful to concisely spit out in 1,000, 2,000, or even 4,000 words. We plead with the designers to make it all fit–six-point type, less margin, fewer pictures–anything to make the story fit. In the end we concede that pictures are worth a thousand words (often quite literally), and we let them help us tell the story.

Since my interview in front of the stained-glass windows, I have heard many more amazing, charming, and even humorous stories. For this issue alone, Leslie Norris told me the story of his becoming a poet, Vincent Musaalo told me the story of his childhood in famine-ravaged Africa, and food science students told me the story of their cheese testing. The cheese people, as I have come to call them, were particularly amusing. In the interview, there were three students and a professor–all part of a BYU dairy products evaluation team that participates in national competitions. They take their cheese testing very seriously, but clearly they do not consider themselves with the same gravity–joking of player eligibility and red shirting. I found myself laughing out loud as I transcribed the interview tape.

I have also heard the compelling stories of an American journalist who spent time with Mao Zedong in Chinese Red Army camps during the volatile 1930s; two violinists who left promising careers in the Soviet Union for the freedoms and uncertainties of America; and a refugee who had to leave some of his children behind when his family was evacuated.

Hearing experiences like these, I feel honored to be the receiver of the stories and find myself enriched by their profundity. I am not alone. On our staff we all come back from interviews, taken by the stories we hear. Then we gather in offices and meetings and create new stories in the telling of the ones we have heard.

And we are always as taken by a story’s teller as by the story itself. People are rich and colorful and deep; we see this in their stories. Cultural critic Neil Postman writes, “Only through stories do facts assume any meaning whatsoever; . . . [we] require a story to give meaning to [our] existence. Without air, our cells die. Without a story, our selves die” (“Learning by Story,” Atlantic Monthly, December 1989, p. 122). Stories are, after all, the building blocks of our lives. I speak not only of the stories writers hear in interviews, but also of the stories we each hear every day–stories our grandpa tells us about his day, stories our history teacher tells us about war and revolution, stories our spouse tells us about that day at work. And then there are the stories we tell our children before bed, stories we tell in church talks, and stories we tell our spouse aboutour day at work.

Whether we are speaking them, reading them, hearing them, or writing them, stories are the framework in which we order our existence and find order in the existence of others. Novelist Leslie Marmon Silko writes, “You don’t have anything if you don’t have the stories” (Ceremony [New York: Penguin, 1986], p. 2). As a writer, I literally would have nothing if I did not have stories. But as people, we would be equally as empty and flat without stories. Stories shape us and mold us. “They are all we have” (Ceremony, p. 2).

Ask an Expert: How to Imitate BYU Bookstore Fudge

These experts know how its done.

BYU Baits Bears in the Bookcliffs

Students and teacher hold up their prizes from a winter outing to study wild bears.