Reach for the Summit

The cougar, however, represents more than a mascot. Roberts selected cougars because the large cats roam the nearby Wasatch Mountains he hiked frequently. His hiking hobby led to the creation of the popular annual Timp hikes, which endured for nearly 60 years. So the cougar also represents Roberts’ wholehearted passion for the outdoors, which complemented his role as the man who directed BYU athletics from 1910 to 1928.

Eugene Roberts’ substantial BYU legacy will become evident this October when he is highlighted as the honored founder during Homecoming 2009. The Homecoming theme, “Reach for the Summit,” reflects the way Roberts lived his life.

Enrolling as a student at Brigham Young Academy in 1898, Roberts wrote articles and drew cartoons for the school newspaper and his classmateseventually elected him senior class president. Later, as athletic director, he used his persuasive writing and leadership skills to promote the building of the women’s gymnasium. Additionally, Roberts pioneered the recreational leadership program. Under his watch, physical education became a bachelor’s degree program, and football—banned as “a barbarous, brutal exercise” near the turn of the century—returned to campus. (Roberts had played BYA football before the ban.) 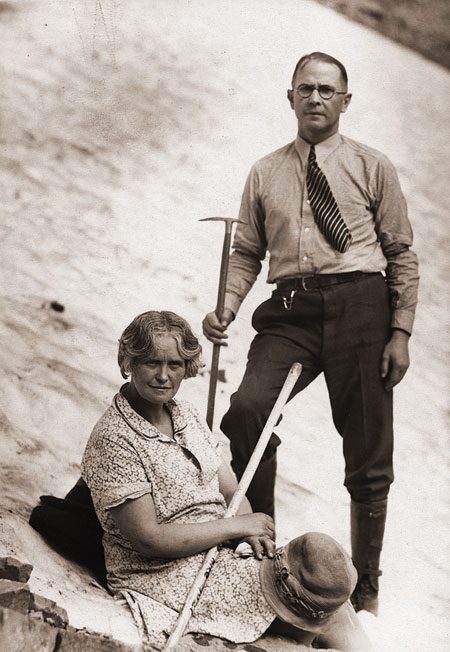 With a walking stick and an ice pick, Eugene and Sytha Roberts rest on the Timpanogos glacier during a 1920s hike. The first BYU athletic director, Eugene began leading community climbs up the mountain in 1912.

Roberts nurtured such world-class athletes as Alma Richards (1913), who became Utah’s first Olympic gold medalist, and Clinton Larson (B ’25), who set a world high jump record that stood for 17 years. But Roberts emphasized fitness for everyone, a focus that led to marching, folk dancing, square dancing, and a rich intramural program. He even took a two-month leave from BYU to study ballroom dancing in New York City so he could bring social dance to campus.

His greatest joy came from serving the students at BYU. “This school furnished the proper staging for me to act out many of the parts I had so often practiced in mental dramatic rehearsal; to be a cause, to do something worthwhile, to assist in great mass movements; to influence individuals,” Roberts said. “These were dreams from my youth, and Brigham Young University furnished the setting for the realization of these dreams.”

As much as he loved athletics, Roberts delighted in the surrounding mountains, particularly Mt. Timpanogos. He earned the name “Timpanogos Roberts” for his annual pilgrimage to the mountain’s summit, which often drew thousands of hikers. The hikes began in 1912 and continued 17 years beyond his death in 1953. They were discontinued to preserve the delicate mountain ecosystem, or as one writer penned, “In 1970 Timpanogos was loved to death when 3,500 made the summit.” Roberts named the trailhead Aspen Grove and helped forge a trail. He even created a Timpanogos legend.

Roberts left BYU in 1928 to share his administrative and educational talents at the University of Southern California. While there he created a religion class for Latter-day Saint students, which was taught by Elder John A. Widtsoe of the Quorum of the Twelve and became the forerunner of the first institute of religion outside the intermountain area.

BYU celebrates Homecoming every fall, inviting students and alumni to honor the university’s legacy. Roberts’ recognition as the 2009 founder is fitting; as president of the BYU Alumni Association in 1919 and 1920, he organized BYU’s first Homecoming celebration.