Reach for the Summit at BYU Spectacular

When James Conlee (’95) auditioned to emcee BYU Homecoming Spectacular, he was a natural for the part, says artistic director Janielle Hildebrandt Christensen (BA ’67). Unlike most emcees who appear as themselves, Conlee will come onstage as BYU’s honored founder for 2009: Eugene L. Roberts (AB 1916), the school’s first athletic director and a man who loved Mt. Timpanogos so much he organized an elaborate hike that drew thousands of people to the mountain each year. 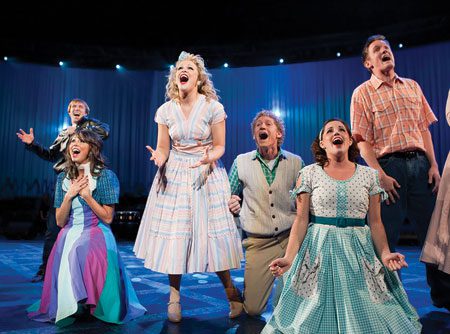 The Young Ambassadors will join other BYU performers onstage for Spectacular.

Much like Roberts, Conlee has a passion for Timpanogos. Conlee spends hundreds of hours there, received his testimony on the mountain, and stayed in the mountain three days to read the Book of Mormon cover-to-cover. “He knows every valley and meadow of Mt. Timpanogos,” Christensen adds. “He also has a wonderful speaking and singing voice. He embodies our founder.”

Conlee, a former BYU Young Ambassador and Broadway actor, is one of many performers who will take the stage for Spectacular, which will unfold Oct. 22 and 23 at 8 p.m. in the Marriott Center. Also featured will be some of BYU’s most talented students, from Young Ambassadors, Men’s Chorus, Women’s Chorus, Vocal Point, the Ballroom Dance Company, and the Wind Symphony.

Roberts, however, provides much of the inspiration for this talent showcase. Although not well-known to contemporary audiences, Roberts was a colorful innovator during the early part of the 20th century. Among other things, he brought physical education to the student body and introduced social and other forms of dance to the campus.

“Audiences will get a glimpse of Roberts’ humor, vision, and intellect,” says Michael G. Handley (BS ’83), producer. “Additionally, his great respect and reverence for the mountains is reflected in Reach for the Summit, our Homecoming theme. His example and inspiration in connecting us to those precious and sacred mountains encourage us to strive for excellence.”

The show will open with the overture, “Rocky Mountain Holiday,” by the Wind Symphony. James L. Stevens (BA ’03) will direct Vocal Point in a western medley of “When It’s Springtime in the Rockies,” “On the Trails of Timpanogos,” “There’s a Long, Long Trail,” and “On the Trail of the Y.”

Also included in the show will be the Utah Regional Ballet offering the pas de deux from the Legend of Timpanogos ballet and the Wind Symphony performing “Aspen Jubilee,” reminiscent of the Aspen setting Roberts loved so much. The other groups will select from the best of their repertoire.

The finale, which caps the theme, will bring the groups together for Mack J. Wilberg’s (BMU ’79) arrangement of “High on the Mountain Top.” A highlight will be new aerial footage of Mt. Timpanogos.

“We’re honoring a man who could find a sermon in a common stone,” Handley says. “And we hope to show a glimpse of the outdoor beauty that held Roberts’ passion.”

A Place to Call Home

While the façade may be stunning, the Hinckley is a true workhorse, serving as a home for alumni.

Students in the BYU Philharmonic Orchestra got an opportunity of a lifetime to perform with violinist Itzhak Perlman.