Examining the human skull in the office of Erin D. Bigler (BS ’71, PhD ’74) is a sobering exercise. The skull, cut in half crosswise, can be held in the palm of a hand. It is much lighter and appears more fragile than one might expect. In some places, the bone is so thin that light shows through.

“It’s stronger than it looks, but that’s not necessarily good news for kids whose brains slam back and forth against it when they’re hit hard in a football game,” says Bigler, professor of psychology and neuroscience and founder of BYU’s Brain Imaging and Behavior Laboratory. 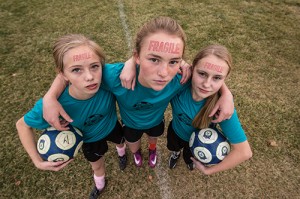 If parents and doctors push for rule changes that reduce risk, children can more safely compete.

The cultural value placed on playing aggressively, getting back in the game, and winning at any cost continues to trump evidence that violent sports have the potential to damage young brains. “We’ve known about these risks for decades now, but to this day, if you’re watching any game on TV, the sportscaster idolizes the hit,” says Bigler.

While most concussions resolve well, a significant number don’t. Bigler finds the sheer numbers “alarming”—about 4 million concussions annually in the United States, with about 15 percent involving complications. “That becomes a huge number. Playing contact sports increases the likelihood of concussion, and therefore we must minimize the risk of anything serious,” Bigler says.

He warns of the dangers inherent in society’s willingness to overlook grave risks for sports, and he believes parents need more information to make sound decisions about activities that might jeopardize their children’s brain health.

Concussions Are a Brain Injury

When people’s heads are hit or jarred hard, the brain can become injured as it moves and distorts inside the skull. “There’s no specific medical treatment for concussion,” says Bigler. “Generally, with rest and time, spontaneous recovery occurs.” Sleeping and relaxing are good. Not good are gritting through the pain, ignoring symptoms like irritability or inability to concentrate, and risking further injury. Even mental work, such as studying and reading, taxes the brain and should be done in moderation or even suspended until a specialist clears the person for normal activity. Return-to-play decisions should be medically monitored.

Julie Davis Nelson (BS ’87), who studied under Bigler for her doctorate in psychology, says she did not fully understand the brain risks to her soccer-athlete daughter. During tournament play in 2004, then 16-year-old Karley suffered a concussion that appeared minor at first. But headaches, difficulty concentrating, and slower learning lasted several weeks. Even today, says Nelson, Karley has trouble retrieving words and considers herself somewhat cognitively slower. Still, the ultimate effects were mild: “All-in-all, she graduated from college with stellar grades, served in student leadership, captained her college soccer team, and is now a soccer coach,” says Nelson.

A family friend, and registered nurse, present at Karley’s game in 2004 knew enough about concussions to insist the coach keep Karley from “shaking it off” and getting back in the game. That prevented Karley from risking second-impact syndrome (SIS)—another concussion before the first one heals. SIS can cause permanent brain damage, severe disability, and even death. “The first concussion doesn’t have to be severe for SIS to occur after a second concussion,” says Bigler, “and the second concussion doesn’t have to be severe either.” That means it’s critical that a child with a concussion not be allowed to participate in any risky activity until the concussion is fully healed. That determination should be made by a qualified professional.

Your pediatrician is a good source for basic information, but if your child has a concussion, you may also want to consider asking for a referral to a concussion clinic, often affiliated with a sports medicine program. Bigler notes that most major cities have sports concussion clinics that provide the appropriate assessment and diagnostic tools to evaluate and treat concussions.

Researchers are just beginning to explore sub-concussive impacts—mild but repetitive blows to the head. In soccer, these are the high-speed collisions and headers that don’t produce symptoms of head injury but expose the brain to significant forces. “Heading a soccer ball involves approximately 30–40 G-force. G-forces in the 100 G-force range may result in concussion. So that’s not enough to produce a concussion, but it definitely moves the brain in the cranium. In football, for a lineman, every single play bangs the head. We just don’t know what the adverse effects are of these milder but repetitive blows, but they’re probably not inconsequential,” says Bigler.

Risks for Girls Are Different

Girls are getting the competitive sports bug more than ever, says Bigler, but their physiology is less prepared for it. Their necks are generally longer, thinner, and less muscular than boys’, so when their head is hit, it is more vulnerable to impact forces and the stretching and twisting movements that distort the brain and distend its delicate cells.

There’s also the problem of more size disparity in girls’ sports. In girls’ soccer, for example, “you have petite athletes and cruisers playing together and potentially running into each other,” says Bigler. “That’s a problem.”

Recent research is showing that girls also might be more aggressive than boys when playing competitive sports, says Bigler. The reason isn’t clear and the evidence is not solid yet, but if it’s real, this behavior adds another risk factor for girls. And because it’s counterintuitive, the behavior could more easily be overlooked, making brain protection less likely.

Parents know that helmets are a must for risky sports like football and hockey, but few realize how important they are for everyday activities like skateboarding and bicycle riding. Bigler acknowledges how difficult it is to insist on helmets for these activities, but he thinks parents need to do better. “Even as a neuropsych professor, I can’t persuade my kids to always get their children—my grandchildren—to wear helmets. But if they’re riding with me, they’re wearing helmets.”

As important as helmets are, they might allow parents and children to believe the head is fully protected, says Bigler, but it’s not: “Helmets are good at protecting from skull fractures and absorbing impact, but with high impact they cannot protect the brain from movement inside the skull. Helmet-to-helmet hits can get into the concussion range, even in Little League.”

Bigler also believes the rules for many competitive sports must be changed to protect young brains. Since it’s mostly parents who drive the demand for youth sports, they’re the ones who can also bring about changes. If enough parents join with doctors and other experts to become activists for rule changes that reduce risk, children can continue to safely enjoy sports. Bigler notes that more concussions may occur during practice than games, so structuring practices to avoid head impact is critical.

Parents can provide an important protection against concussions, says Bigler, by not overvaluing winning, especially when winning requires violent play. Our sports culture has persuaded parents that their children must be involved in competitive sports to build their self-esteem, but Bigler says there are many ways children can be athletic without risking brain health. If parents choose to allow their children to play riskier sports, they should be as preventive and protective as possible.

Nelson has advice for parents that she wishes someone had given her when her daughter was playing soccer: “Make sure you become educated about the symptoms, the consequences, and treatment of concussions. Understand that you must be proactive about protecting your child because many coaches want a winning program above all, and the pressure to win often overrides their best judgment. Also, many coaches are not educated about the effects of concussions. It is imperative that parents are informed so they can intervene for their child, if necessary. Our children have the rest of their lives ahead of them—careers and families of their own. We need to do our best to protect them.”4

Sue Bergin is a chaplain for VistaCare Hospice in Salt Lake and Utah Counties and author of the new book Am I a Saint Yet? Healing the Pain of Perfectionism.

Info: The U.S. Centers for Disease Control and Prevention, cdc.gov/concussion, offers signs and symptoms of concussions, what to do if you suspect one, and prevention tips. The Sports Concussion Institute, concussiontreatment.com, has extensive information about brain injuries, as well as a link to the video, “Concussions 101, a Primer for Kids and Parents.” Bigler also recommends the book Concussions and Our Kids by Dr. Robert Cantu and Mark Hyman.

Speak to yourself in loving ways and talk about yourself with others as gently as you would speak about another person.

Drawing Out the Withdrawn Child

Parents can create opportunities for their shy children to conquer their fears.