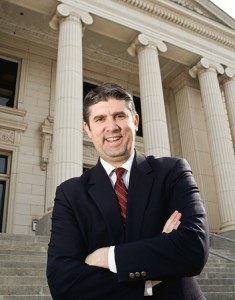 Analyzing a number of America’s foundational documents and speeches, including an early draft of the Declaration of Independence and numerous presidential inaugural addresses, Holland found a surprisingly large number of references to biblical notions of charity. In his book Bonds of Affection, Holland concludes that the history of American politics is more deeply rooted in religious ideals than once believed.

For instance, Holland relays Jefferson’s change of heart concerning Christianity’s role in politics—to the point that when drafting the Declaration of Independence Jefferson resisted the opinions of his colleagues at the Continental Congress and infused religious tones into the final draft. And Lincoln’s second inaugural address, Holland reveals, is full of biblical references. The brief 703-word speech contains more than a dozen references to God.

“Civic charity set a real tone to both presidencies, especially Lincoln’s,” Holland says. “I think he worked especially hard to be charitable to all parties, and he had plenty of antagonists on his own side, let alone his antagonists in the South.”

Holland asserts that while engaged in the Civil War Lincoln worked constantly to combat hatred, exemplifying ideals of charity and affection.

“Holland offers a fresh new reading of standard Lincoln texts,” says Bryon Andreasen, a research historian at the Abraham Lincoln Presidential Library and Museum. “His argument for ‘civic charity’ in public life will challenge Lincoln scholars to think again about accommodations between the secular and the sacred in the meaning and intent of Lincoln’s words.”

BYU history professor Mark I. Choate was on duty with the U.S. Special Operations Command in southern Afghanistan.

“Now, How I See It…”: Some Illustrated, Bookish Thoughts on Perspective

At the very moment the event happens, we begin to customize and individualize “reality”