On Friday, June 16, at a special meeting capped by a sustained and emotional standing ovation, Rex E. Lee announced that he will be stepping down as president of BYU at the end of 1995. 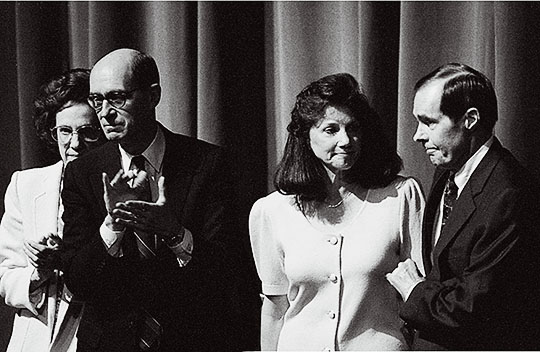 Above: Elder Henry B. Eyring of the Quorum of the Twelve and his wife, Kathleen, join faculty, staff, and administrators in a standing ovation for President Rex E. Lee and his wife, Janet. Citing health difficulties and physical limitations, President Lee recently announced his resignation. Photo by John Snyder.

For several years, President Lee has had an indolent form of T-cell lymphoma, which cannot be cured but that has been controlled since it was first diagnosed. He has also suffered from peripheral neuropathy, a damage to the nerves in his arms and legs that, in his words, “has been both progressive and irritating.” The cancer for which President Lee received treatment before becoming president of BYU in August 1989 is still in remission.

Neither condition, President Lee explained to the assembly of faculty, staff, and administrators, “has had any discernible impact on my ability to perform a job that I have loved so much, as your president.

“Then came the series of events that began in mid-May,” he continued. “I was hospitalized for about two-and-a-half weeks, where I experienced a variety of rather serious infections, underwent surgery, and in general had a really ‘enjoyable’ time.”

When, upon his release, President Lee asked his doctors what kinds of things he could avoid to prevent such an episode from recurring, “their answer sounded a lot like my job description,” he quipped.

President Lee then explained that “after careful and prayerful consideration and consultation with a few people whose views on these matters have been very helpful, I have reluctantly, though quite clearly, come to the conclusion that while my pres-ent level of energy and physical resources will sustain personal and professional activities that are useful and productive, my circumstances no longer mesh with the inflexible and unpredictable demands of the office of BYU president, as it ought to be performed.

“Accordingly, I have formally requested that President Gordon B. Hinckley consider releasing me as your president, and with characteristic graciousness and compassion, President Hinckley has granted this request.”

It is expected that the formal transition will occur toward the end of 1995. Until then, President Lee indicated he will continue working on the university’s 10-year accreditation review and the attendant self-study that each college, division, and department is engaged in; on the capital campaign that will be announced publicly in early 1996; and on his other responsibilities as president.

Upon leaving the president’s office, he expects to resume teaching classes at the J. Reuben Clark Law School, and he will return to the law firm of Sidley and Austin, where he was a partner specializing in arguing cases before the U.S. Supreme Court.

Harking back to his years as a runner who competed in numerous marathons, President Lee invited the university community to “approach the coming months with a mindset not of winding down, but rather of finishing strong.”

Elder Henry B. Eyring, a member of the Quorum of the Twelve and the commissioner of the Church Educational System, attended the announcement and expressed the board of trustees’ appreciation for President Lee’s service.

The November issue of Brigham Young Magazine will include an in-depth feature on President Lee and his wife, Janet.

Learning and Discovery in Lee’s Labyrinth of Labs

President Lee is remembered in a tribute by Britsch, who served as academic vice president during Lee's administration.