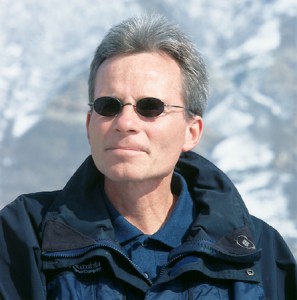 BYU’s Ron Harris is a geological linguist. Using high-tech devices, he is working to translate the earth’s warnings about future tectonic activity.

GEOLOGYA BYU professor is developing a system to predict where one of nature’s most destructive forces will strike.IT’S like putting an EKG on a sleeping dragon that is going to wake up soon,” says Ronald A. Harris, ’81, an associate professor of geology, of his earthquake research.It’s sleeping dragons that make places like Indonesia—a cluster of islands known for their deadly earthquakes—endlessly fascinating to Harris. He is working with a group of students to develop a model to predict where an earthquake might occur next in the region. They hope to help the people of Indonesia prepare for a threat Harris likens to a global killer.“Earthquakes are like terrorists,” says Harris. “But we know where they are going to strike. And it’s not just going to be one discotheque. A whole island is going to be flattened.”Using information collected from the Global Positioning System (GPS), a satellite navigation system controlled by the U.S. Department of Defense, the research team is able to measure the otherwise imperceptible motion of the earth’s tectonic plates.In 2001 Harris and a team of BYU students spent several weeks taking measurements at specific locations along select Indonesian islands. In summer 2003 they will remeasure the locations, comparing the data to see how the plates have moved.Because the information collected from the GPS is so precise, experts can measure plate movement down to a millimeter; the technology allows scientists to develop an accurate map of how stress and strain build up along the boundaries of the plates and eventually lead to earthquakes.Tracking Miniscule MovementThe earth’s outermost shell, the lithosphere, is a solid, rocky layer fragmented into pieces called tectonic plates. These plates mostly float on partially molten material, like sheets of ice on water. Slow movements inside the earth push against the brittle lithosphere, causing the plates to suddenly break.Depending on the magnitude of the earthquake, this rupture can have devastating effects. For example, the 1976 Great Tangshan Earthquake in China killed a quarter of a million people. More recent earthquakes in densely populated nations like Turkey and Japan have flattened the landscape and crippled local economies.Geologists have long tried to measure the buildup of strain along the boundaries of the earth’s plates to anticipate earthquakes, but in the past they have been limited by imprecise tools. The development of the GPS has revolutionized the field by allowing scientists to measure miniscule movements, says Brian P. Wernicke, geology professor at the California Institute of Technology.“Before GPS we couldn’t measure the deformation of many of the earth’s faults very well at all,” he says.Shortly after joining BYU‘s faculty in 1998, Harris acquired four high-resolution GPS receivers for his research. His first GPS project was to collaborate with University of Utah geology and geophysics professor Robert B. Smith to measure plate movement along the Wasatch Fault. 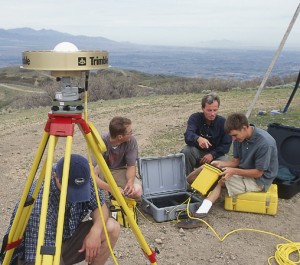 Harris and geology students set up a GPS monitor along the Wasatch Fault. The plate movement along Utah’s faults is fairly slow – 2-5 millimeters a year. In Indonesia plates move up to 40 times faster.

Researchers at the University of Utah and other geologists had taken preliminary measurements along the fault in the early ’90s. In 1999 and 2000 Harris and his team of geology students helped to remeasure the locations to see how they had moved.The project, spanning hundreds of miles of occasionally inhospitable terrain, was a rugged initiation to geology for Harris’ students. Some of the measuring locations were in remote, wooded locations, others on mountain peaks, others on private lands. The crew drove dirt bikes or four-wheelers to reach some of the locations. Occasionally, they hiked, lugging the heavy car batteries used to power the receivers along with them. To ensure accuracy, Harris and his team often stayed overnight to protect the highly sensitive GPS receivers.“You go out in the middle of nowhere, you take a tent, and you sit there for 20 hours, because that antenna cannot budge one bit,” says Harris. “If a cow comes by or a little squirrel climbs up it, you’re toast.”Hearing the Language of NatureData gathered from the Wasatch Fault measurements showed that plate movement is relatively slow—2 to 5 millimeters per year. In Indonesia, the rate of movement is as much as 8 centimeters a year, which is up to 40 times faster.When Harris and a group of students visited Indonesia in 2001, they said it was like journeying back in time. Some islands lacked electricity. The transportation infrastructure was often unreliable. Sometimes, getting from island to island required a 14-hour boat ride.Despite some physical discomfort, Harris made the experience intellectually engaging, says Michael W. Vorkink, ’01, a graduate student in structural geology who accompanied Harris on the trip. He says Harris’ enthusiasm for the project kept the students motivated when political unrest and lagging flight schedules caused headaches and frustration.“He never stops talking about geology,” says Vorkink. “He’s just got a real passion for it. He teaches with a lot of enthusiasm, and it’s really addictive.”Harris, whose third-floor office in the Eyring Science Center boasts a collection of rocks gathered everywhere from Tahiti to Oman, has been obsessed with geology since childhood.As a child Harris constantly inquired about how the two ranges near his home in Oregon’s Willamette Valley were formed. It wasn’t until his first geology class that he got a satisfactory answer. From then on, Harris was hooked.“I thought, Wow. Now I know how to have a conversation with the earth,” he recalls. “I know how to interpret the language of nature.“ 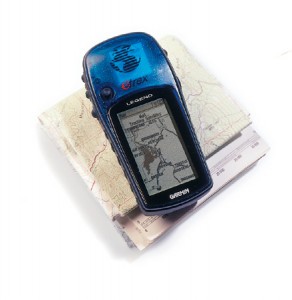 If nature is saying one thing in Indonesia, it’s that more earthquakes are coming. Some 200,000 Indonesians have already perished because of earthquakes and volcanoes in the last century.

If nature is saying one thing in Indonesia, it’s that more earthquakes are coming. Some 200,000 Indonesians have already perished because of earthquakes and volcanoes in the last century, says Harris. And the danger to life and property is increasing as the population rises and developers trade grass huts for brick and metal structures.

After Harris’ team remeasures the locations on the islands this summer, he hopes to create a predictive model showing where earthquakes are most likely to occur next. Armed with the information, the people in the most vulnerable areas of the developing nation can then shore up their homes and businesses.

Harris’ GPS research will play an important role in helping the people of Indonesia be aware of earthquake dangers, says Robert King, a researcher in the Department of Earth, Atmospheric, and Planetary Sciences at the Massachusetts Institute of Technology. King has assisted Harris with GPS data processing.

“Anything we can do to provide the government and the public with information about the dangers,” he says, “provides them with ammunition to require more stringent standards for building.”

As the science of GPS measuring progresses, Harris hopes researchers will someday gain a more accurate knowledge of when a quake is coming. Harris envisions fault lines with permanent recording stations that continuously feed computers data from the GPS receivers. This constant stream of information could allow researchers to recognize the sudden changes in motion that occur before earthquakes.

“GPS may provide a way that we can predict how plate boundaries behave,” says Harris. “It may even warn us when an earthquake is going to happen.”

A tiny mirror built by BYU physics students on its way to our sunny-side neighbor.