Plenty of Space on Campus 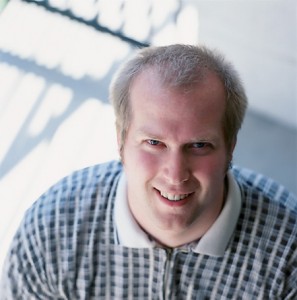 ERIC J. Ehlers, ’02, editor of BYU‘s science-fiction and fantasy journal, Leading Edge, has never dressed up like his favorite Star Wars character, but he doesn’t hold it against people who do. “There’s a curious stereotype that accompanies fans of science fiction,” he admits. “Somebody taking off his shirt and painting himself blue in 20-degree weather for a football game isn’t newsworthy, but when you see somebody going to the theater dressed as Darth Maul, that makes the news.”Ehlers’ interests are indicative of those held by a large number of science-fiction fans around the world and on the BYU campus. In fact, BYU is home to a long-running collegiate academic symposium dedicated to science fiction and fantasy. This February’s Life, the Universe, and Everything, as it is called, marked the symposium’s 20th year. Held over the Olympic break, the symposium’s keynote speakers included Larry Niven, a noted science-fiction writer; Marty Brenneis, who creates special effects for George Lucas’ Industrial Light and Magic; and Christian Ready from the Hubble Space Telescope Science Institute.Leading Edge predates the symposium and is just as impressive. In contrast to the journal’s first issues, which were photocopied, stapled together, and then folded in half, last year’s 25th anniversary issue was a beautifully-bound double issue illustrated with professional art and containing stories and articles by promising science-fiction writers. Linda Hunter Adams, ’63, associate teaching professor of linguistics and English language and faculty advisor for both Leading Edge and Life, the Universe, and Everything, can name several prominent writers off the top of her head who were either staff members or were published in the journal, including Orson Scott Card, ’75, David B. Wolverton, ’71, and Ben Bova. The list of Leading Edge staff who have won national and international writing awards is also long. According to Sally T. Taylor, ’60, professor of English and Adam’s co-advisor, Leading Edge receives submissions from writers from every corner of the globe.Even more significant than the conference and publication are the students responsible for them, says Adams. “These students have created a community,” she says. “They share a common interest and have created wonderful friendships around it. Some of the staff come back even after graduation. These are exceptional students. I think if you took the IQ of the Leading Edge students, you could match it with anybody on campus, including the faculty.”Ehlers isn’t surprised that so many bright students share his love of science fiction and fantasy. “There are a lot of things in sci-fi that resonate well with the LDSmindset,” he says. “We already have an interest in the divine, in being more than just this mortal human.”Taylor and Adams agree. In their view, aside from being two of the most creative genres in literature and art, science fiction and fantasy are two of the most moral as well. “The larger-than-life struggle between good and evil is something we can all identify with,” concludes Adams.