Physics as a Second Language

With the help of her mentors, a lifelong student of English discovers that physics is her native tongue. 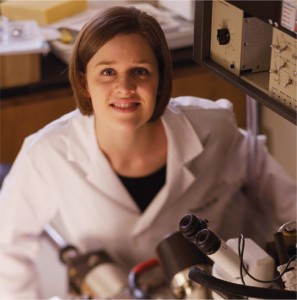 “I love physics because there are so many questions to answer. Every time you discover one answer, 10 more questions come up.” – Amy Grigg

Amy Baker Grigg (’07) came to BYU armed with a love of literature and ready to pursue a career in editing. She began her freshman classes expecting to become immersed in Shakespeare, Hemingway, and her personal favorite, Dostoyevsky. But before she could get started analyzing sentence structures, life gave Grigg a plot twist of her own—one that was quite literally out of this world.

During the fall of her freshman year, English-major Grigg enrolled in a physics class. “Physics was really interesting to me, but I was terrible at it,” says Grigg. “I took a class just for fun—to get better at it. And it just caught me. I was fascinated.” That fascination took her to the lab of R. Steven Turley (BS ’78) and David D. Allred (BS ’71), both professors of physics. Grigg began working as a student researcher in the lab, and she made an impression right away.

“Amy came with some remarkable interests and skills, so it was pretty easy to involve her right off in some projects that involved her mechanical skills,” says Turley.

Those mechanical skills are the result of many hours spent around her four older brothers, who had a passion for working on car engines. “My brothers taught me some basic mechanics knowledge that was useful in research physics,” she says. “It helped me get started in the research before I knew enough physics to be useful.”

After her freshman year, Grigg worked on a student-faculty team that constructed a mirror for the Venus Express, a satellite launched by the European Space Agency in 2005. Grigg says that the experience was irreplaceable. Knowing that she was working on something that would orbit another planet (and all this before her 20th birthday) was quite a thrill. “It took a couple tries to get it right,” she says. “There was a lot of work from a lot of different people that went into this project. Each person had a little part and they all came together—not only from our group, but from all over the nation.”

According to Turley, the secret to Grigg’s remarkable success lies in her love of learning: “Whenever we would say, ‘We need to make a measurement on this instrument—does anybody want to learn?’ Amy’s hand was always the first to go up. She quickly became skilled in lots of experimental techniques because of her enthusiasm for learning.”

“I love physics because there are so many questions to answer. Every time you discover one answer, 10 more questions come up.” –Amy Grigg

With Turley acting as her mentor, Grigg later received grants from BYU’s Office of Research and Creative Activities (ORCA) and from NASA to research how oxidation affects the interaction of high-energy ultraviolet light with different materials. Grigg has presented her research at more than a dozen research conferences, and her project was named best presentation at the American Physical Society Four Corners Research Conference.

“Mentored learning has been the key to most of my learning at BYU. Doing research with Dr. Turley showed me what physics in the field is really like. There is so much about physics that you can’t learn in a classroom,” says Grigg.

Turley says that mentored research not only enhances the undergraduate experience, but gives students an advantage when applying for jobs and graduate schools. Grigg, who will graduate in August, is considering a PhD in physics but is also intrigued by the idea of doing research in a national lab. “You get to be involved in such a wide range of projects there,” she says.

Wherever Grigg ends up, she is glad that she set aside Crime and Punishment and picked up the ellipsometer. “I love physics because there are so many questions to answer,” she says. “You never get stuck doing the same thing. Every time you discover one answer, 10 more questions come up.”

The university carillonneur shares his top-10 playlist of carillon songs.