Of Top Ramen and Dollar Movies

Readers share a wealth of memories from their  days as strapped students. 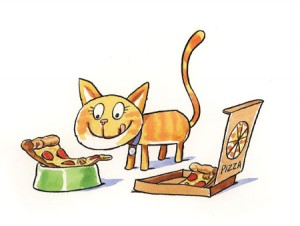 Cat Chow on a Budget

I worked as a pizza delivery driver while attending BYU. With my limited income, there were times my wife and I were not sure we would have enough to buy food each month. Fortunately, I was allowed to take home extra pizzas from work after closing. We’d eat pizza several times a week, even for breakfast occasionally. When we didn’t have enough money to buy cat food, we decided to put some pizza in the cat dish to see what would happen. To our surprise, the cat ate it up—crust and all.

After graduation I found a job, and we moved to an apartment complex near my work. The apartments, however, did not allow animals, so we asked my wife’s grandmother in California to provide a temporary home. Several weeks after delivering the cat, we received a phone call from Grandma. “I tried feeding your cat everything I could think of, even canned cat food, and she wouldn’t eat it,” she said. “The only thing I can get your cat to eat is pizza!”

After one particularly busy week of studies during my sophomore year at BYU, my roommate and I decided we needed a night out. The only problem was that we were both flat broke. Unwilling to let our indigence get in the way of a well-earned Friday night, we literally dug through the couch cushions until we scraped up enough loose change to get each of us into a dollar movie at the student center. Victory!—or so we thought.

We were feeling pretty giddy as we stood in line at the theater, congratulating one another on the resourcefulness we’d developed from living as university paupers. As we stepped up to the box office, I plunked down my pitiful pile of treasure. However, all levity fled as the cashier informed us that the student ticket price had been raised 25 cents. For two students with exact change in their pockets, it was a disaster.

As I scraped my coins back into my hand, I heard a voice from the line call, “I’ve got an extra dime.” Then another: “I’ve got a nickel, I think.” And another: “Here’s a quarter if you need it.” We stood speechless as students, poor as we were, handed us what they had to spare. We erupted into thank-yous and bought our precious tickets with what was surely a wealth of “widow’s mites.”

In 1991 my husband, Joe (BA ’92), was finishing his degree at the Y. We had a little girl and another on the way. In order to stay as debt-free as possible, we chose to go without a car for almost 18 months. We used the bus system, bicycles, and our feet to get around. When on bicycles, we would pull our daughter behind in a bike trailer.

The trouble came when my doctor put me on bed rest—no more bikes or walking for me. Joe fixed up the bike trailer for me and our daughter like a rickshaw. After a few modifications, we were on our way, me sitting on a board with a pillow in the trailer and with our daughter on my ever-decreasing lap.

One day we had an appointment in Orem, where there would also be an evening parade after the buses stopped running. We decided to go to both. Joe pulled the rickshaw up the hills to Orem and then around town for the rest of that long day. That Sunday our good bishop came to our house to convince us it was time to get a car. Somehow he had found out about our rickshaw and was concerned for our well-being. He even had done some homework for us and found an old beater for only $300. The next day we bought that car and the BYU rickshaw was officially retired! 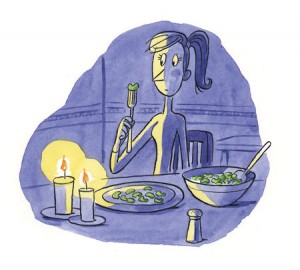 Living in Heritage Halls, my five roommates and I were always pinching pennies. We would take turns being in charge of meals for a week and each chipped in $4 every week. To help out, many of us would bring something from home after a visit, such as garden produce, canned goods, or game meat from fathers and brothers.

Once while baking cookies, a roommate ran out of flour. Searching through the cupboards, she found and used a sack of powdery white stuff. Another roommate fixing dinner used it to make creamed spinach, which, to her great disappointment and mystification, refused to thicken and cream.

Upon investigating, we discovered that my roommates had found my stash of plaster of paris for an art project. None of us suffered any ill effects from eating the cookies or the spinach, although one roommate called the Health Center to make sure she wasn’t going to die. The Daily Universe even ran a story about our experience.

What I Paid For

Two on-campus jobs, savings from summer work, and a small scholarship usually provided enough to make ends meet while I was at BYU, although I was hardly worry free about finances. However, despite my budgetary limitations, I probably should have spent a little more on dating. One no-cost date in particular, though inventive, turned out very unromantic.

I had a crush on a girl I worked with and had noticed that the library had North by Northwest in its video collection. However, it couldn’t be checked out; it could be viewed only in the Learning Resource Center (LRC). Thinking I could deal with this limitation, I asked my coworker out, telling her only that we’d be going to a movie.

She must have wondered when I took her to the library and then up the stairs to the LRC. She also must have wondered when I went to the desk but came back empty-handed. As we walked over to the viewing monitors, I began to wonder why I hadn’t thought things through better: each viewing station had only one set of headphones and was partitioned off from all the others.

We decided to stay for the show but had to spend the entire time isolated from each other, wearing headsets, and, in my case, realizing that I got what I paid for.

Sacrificing for a PhD

Making ends meet on student loans can be challenging, and getting paid only twice a year led to some creativity when money ran out before the next installment arrived. I remember eating frozen lima beans for three days because there was a stockpile in the freezer. I had my electricity cut off for a week or so, causing me to (temporarily) abandon my late-night study habits and rise and set with the sun. My mother made me a doorstop and stuffed it with rice so there would always be a little food when I got desperate. And happiness was the big care packages from home with everything from ramen to Hamburger Helper. It was all worth it to pursue my dream of a PhD, and I was grateful BYU cost less than most schools and accepted me even though I was not Mormon.

My fondest memory came when I told another grad student a funny story about what I was doing for food. My advisor, Robert A. Nelson, turned around and asked, “Are you really that broke?” A little embarrassed, I just laughed and said, “Yes, but my check comes in two weeks, so I should be okay.” He opened his wallet, handed me $40, and said, “Pay me back when you can. You shouldn’t be hungry.” I was new to BYU and the Mormon world, and that gesture made such a difference. I was able to eat for the next two weeks, and I knew I had made the right choice to come to this place.

First Person: When You Had Class

If BYU's lecture halls could talk, here are some stories they'd tell.